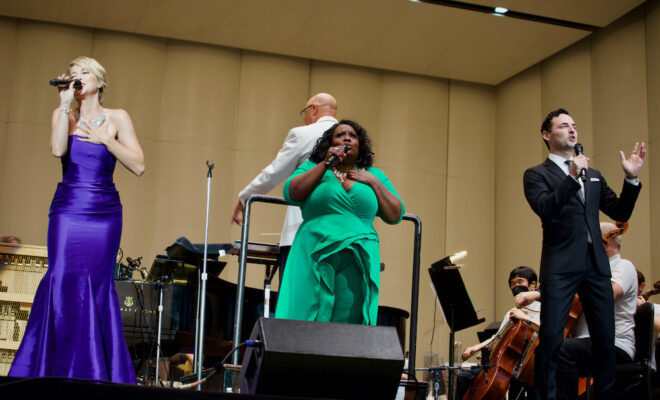 A Night on Broadway and Scout Day celebrated at The Pavilion

On Thursday, July 14, 2022, The Pavilion celebrated the iconic musical scores that have haunted, thrilled and inspired audiences for decades with A Night on Broadway sponsored by The Wortham Foundation and featured a performance by the Houston Symphony. Scout Day was also held before the performance and provided an opportunity for scouts to earn their Music Merit Badge through attending a live concert and participating in free, fun and interactive activities that satisfy badge requirements.

The event celebrated the music of Broadway including The Phantom of the Opera, Les Misérables, The Lion King, West Side Story, Wicked and more in one thrilling, crowd-pleasing performance. The Pavilion welcomed conductor Chelsea Tipton II and featured vocalists LaKisha Jones, Morgan James and Max von Essen to the Main Stage. American conductor Chelsea Tipton II has won over audiences and critics with his vibrant musicality, versatility, accessibility, and commitment to art education. Best known to millions of TV viewers as a top four finalist during the 2007 season of “American Idol,” Jones’ expressive vocals electrified the Broadway stage in the Oprah Winfrey produced, Tony Award-winning musical, The Color Purple. Morgan James is a classically trained vocalist, Broadway veteran and recording artist who has appeared in the Original Broadway casts of Motown: The Musical, Godspell, Wonderland and The Addams Family. Max von Essen recently starred on Broadway as Gleb Vaganov in Anastasia and then toured the country as Marvin in the Lincoln Center production of Falsettos. Max completed his run in An American in Paris at The Palace Theater as Henri Baurel, a performance which earned him a nomination for the 2015 Tony, Drama Desk and Outer Critics Circle Award.

Mezzanine and lawn seating are free for all performing arts events and tickets for most performances are $25 for orchestra seating.

During pre-concert activities beginning at 7 p.m., Boy Scouts and Girl Scouts of all ages had the opportunity to participate in Scout Day at The Pavilion to complete their music merit badge through a variety of requirements set up inside The Pavilion’s Event Center. Scouts attended the free event in uniform and were provided a blue merit badge card at the workshop. A variety of other pre-performance activities were offered in the North Plaza including a special art project, The Pavilion Partners Instrument Petting Zoo, and sponsor activations.

For more information about The Pavilion and upcoming events, visit www.woodlandscenter.org.