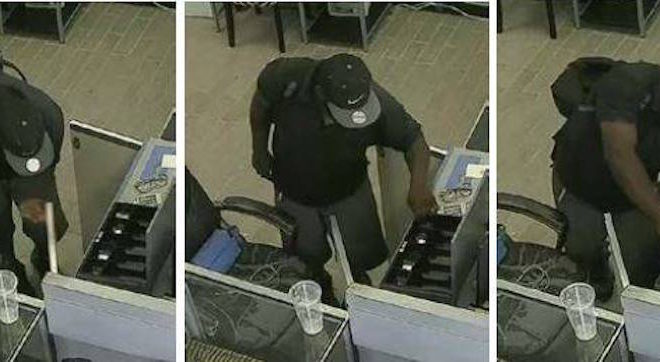 On June 16, 2017 at 12:08 pm, the Montgomery County Sheriff’s Office received a 911 call in reference to a robbery in progress at the Regal Gold Buyers, located at 309 Sawdust Road. Upon arrival, Deputies learned that at approximately 10:37 am, a black male entered the store and displayed a small handgun, then tied the clerk up in the back of the store and proceeded to steal an undisclosed amount of cash and products. The male left the store on foot walking toward Bank of America and quickly out of sight. The male was described as a black male, approximately 25-35 years of age, 5’09” tall, weighing 180-200 pounds. The male was wearing black sneakers, light blue denim shorts, a black polo-style shirt, and a black baseball cap with a white “Nike swoosh” on the front. The cap has a gray brim with a reflective sticker on the top center. The male was unshaven and was carrying a black colored backpack over his right shoulder.