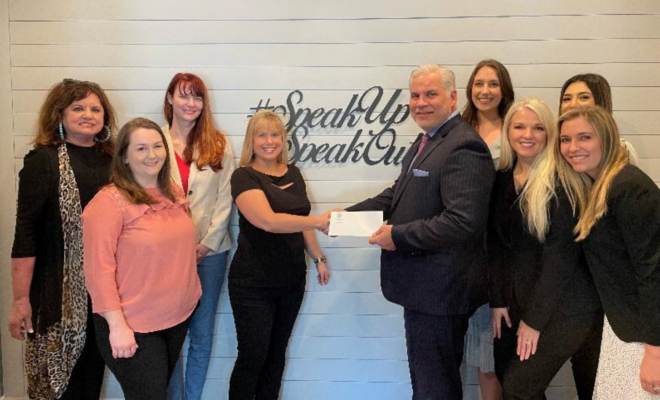 On Tuesday, May 25, 2021, District Attorney Brett Ligon presented the Montgomery County Women’s Center with a monetary donation to support their continued work in the community on behalf of victims and survivors of domestic violence. Mr. Ligon contributed $8,500 from a fund tailored for this purpose and as part of an effort to increase awareness of domestic violence in Montgomery County. Mr. Ligon explained that his contribution held special significance for him and his office because an average of 85% of domestic violence victims are women and thus are at greater risk of family violence.

During the pandemic lockdown in 2020, the District Attorney’s Office saw an average 20% increase in reported domestic violence cases, with some months as high as a 50% increase. Domestic Violence Chief Echo Hutson contributes this disturbing trend to increased isolation and stress in the home due to economic and health concerns and lack of access to other safe resources (the ability to request help from family, friends, co-workers). Similarly, Special Victims Division Chief Shanna Redwine noted that this isolation led to a short-term decrease in child abuse reports. Importantly, the reports of child abuse decreased, but the abuse did not. Mrs. Redwine believes the decreased reports are due to children being isolated and unable to ask for help from teachers, counselors, or other mandated reporters in the school system. Child abuse reports increased again when children began returning to school and other activities.

On May 17, 2021, District Attorney Brett Ligon and Domestic Violence Chief Echo Hutson, began a jury trial on defendant Luke Booker. During the trial, Booker pled to 55 years in TDCJ for assaulting and strangling his girlfriend. The sentence achieved in the Booker case reflects the importance of prosecuting domestic violence in Montgomery County District Attorney’s office. Following the trial, Mr. Ligon expressed his continued commitment to combatting domestic violence and child abuse in Montgomery County on behalf of victims like the one in the Booker case. Mr. Ligon continues to expand his office’s collaboration with law enforcement, the Montgomery County Women’s Center, Children’s Safe Harbor, Texas Forensic Nurse Examiners, and numerous other community partners to increase options for victims trying to escape violence in their homes.

District Attorney Brett Ligon said, “Our goal is to let abusers know that we will not tolerate violence in our community. We will not let abusers isolate victims and allow violence to continue behind closed doors. The District Attorney’s Office will continue to join with our community partners to shed light on the darkness of domestic violence and child abuse, and we will seek harsh penalties for those who hurt their vulnerable loves ones.”