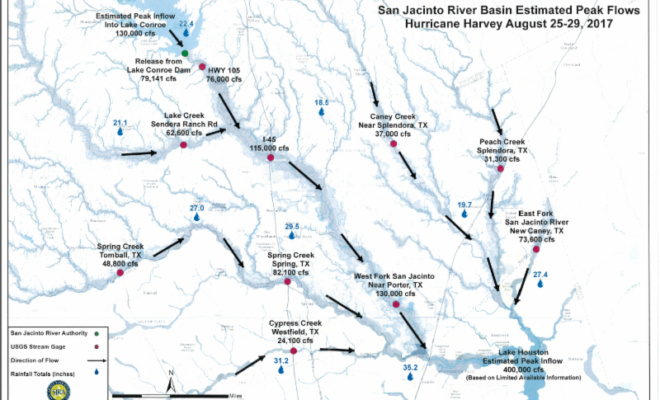 MONTGOMERY COUNTY, TX – October 10, 2017 – In the wake of extreme flooding from Hurricane Harvey, County Judge Craig Doyal shared the county has agreed to seek federal funding for a flood mitigation study, including potential reservoir projects to help reduce downstream flooding.
County commissioners discussed the issue Tuesday and agreed unanimously to have Judge Doyal send a request to U.S. Rep. Kevin Brady for federal funding for the study and any projects needed as a result.
Judge Craig Doyal said Montgomery County needs to do all it can to see whether additional reservoir projects could help reduce the devastating impact of flooding the county has suffered three times in the past two years. According to Darren Hess, Director of Homeland Security and Emergency Management, 4,793 Montgomery County homes were affected by Harvey, eclipsing previous damage totals, including the 1994 flooding.
The proposed study would examine Montgomery County watersheds, including Cypress Creek, Spring Creek, Preach Creek, Caney Creek, Lake Creek, the west fork of the San Jacinto and others.
“A look at the recent volumes of water in our watersheds demonstrates that Cypress Creek, Lake Creek and Spring Creek, along with the San Jacinto’s west fork and other creeks, played a major role in Harvey flooding; studying these watersheds may help identify projects that could impound water during heavy storms and help reduce flooding,” Judge Doyal said.
To support its request for funding Judge Doyal will send a proposal by Huitt-Zollars obtained by Commissioner James Noack that estimates $1.25 million to study the issue and an additional $95.5 million for the project phase. However, costs could very well exceed this initial estimate, Judge Doyal said.
Judge Doyal has had numerous conversations with state and federal officials during and after Hurricane and Tropical Storm Harvey, and has discussed the need to identify projects to help reduce flooding in Montgomery County..
Recently, Lt. Gov. Dan Patrick, while visiting Montgomery County’s Emergency Operations Center, invited Judge Doyal to identify projects that may be worthy of state or federal funds.
In addition, Judge Doyal has been in touch with U.S. Rep. Kevin Brady’s office to push for a federal role.
“We cannot build reservoirs on our own,” Judge Doyal said. 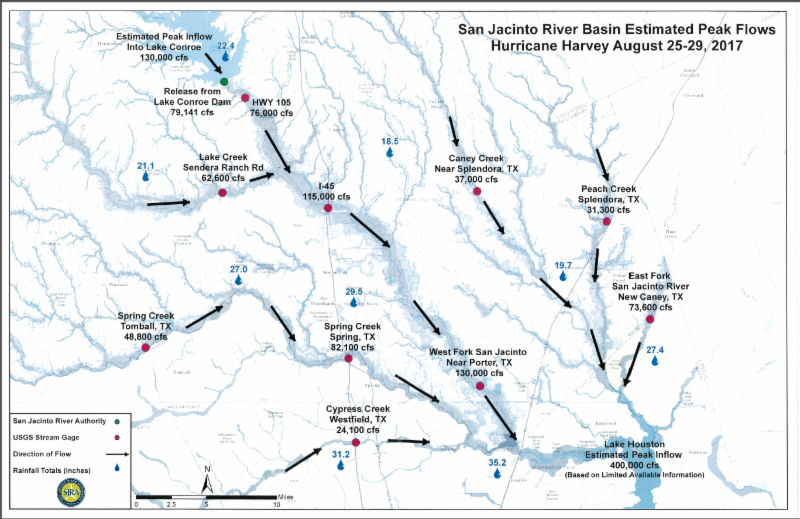