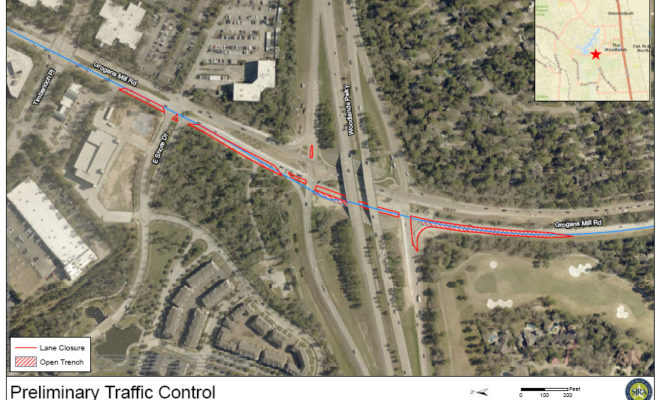 Beginning on January 3rd, crews will begin a construction project to replace a section of 30-inch diameter water line that experienced two ruptures in a span of approximately six months. The project will involve replacing the existing PVC pipe with ductile iron pipe and is expected to be completed near the latter part of April.

The start of the project was delayed until after Christmas to avoid impacting holiday traffic since the project will necessitate the closure of one southbound lane of Grogan’s Mill Drive at the intersection of Woodlands Parkway. In addition, some turn lanes will have to be closed or modified to accommodate the construction.

Construction updates and a map of the impacted area are available at www.sjra.net/grp.

This section of water line was installed as part of SJRA’s 57-mile surface water transmission system and has been in service for less than two years. It is very unusual for a brand new line to experience a rupture so close to the time of construction – even more so two ruptures in close proximity. Forensic engineers retained by SJRA have investigated the cause of the ruptures and developed the plans and specifications for the repair. SJRA intends to recover the costs of the repair once the responsible parties are determined.

At this time, the focus is to get the line back in service before water use begins to increase during the late-spring and early-summer. Current water service to customers was not interrupted because the surface water line serves as a supplemental source to existing groundwater supplies. Existing water wells will be used to maintain full service while repairs are conducted.