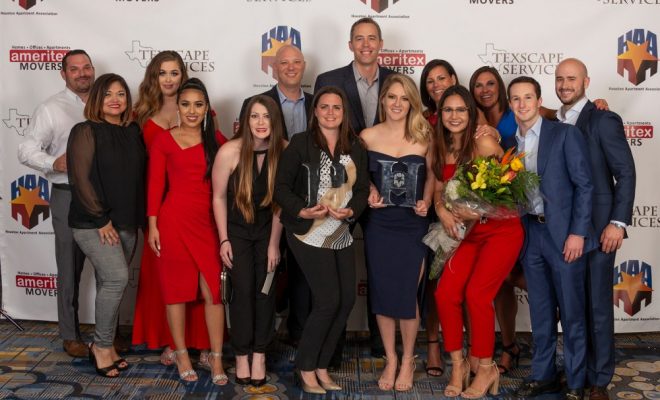 THE WOODLANDS, TX – The Howard Hughes Corporation and multifamily management company, The Dinerstein Companies, received two top awards from the Houston Apartment Association (HAA) in recognition of One Lakes Edge in Hughes Landing and Creekside Park The Residences in the Village of Creekside Park in The Woodlands. The HAA 2019 awards ceremony was held June 13, 2019, at Hilton Americas in Houston, with representatives of The Howard Hughes Corporation and The Dinerstein Companies in attendance.

Creekside Park The Residences took home the award for “2018 New Development of the Year.” One Lakes Edge won “Top Mid-Rise Community of the Year” in the category of apartments built 2010 to 2017, mid-rise, with more than 300 units.

“We are proud to be honored among what is considered as the best and brightest multifamily properties in the Greater Houston area,” said Crystal Bledsoe, National Multifamily Asset Manager for The Howard Hughes Corporation. “One Lakes Edge and Creekside Park The Residences offer stellar amenities that provide flexible and diverse living options for a variety of lifestyles and residents of The Woodlands.”

Creekside Park The Residences features one-, two- and three-bedroom plans, with most ground-level homes including separate fenced yards. One Lakes Edge is an eight-story, luxury multifamily development with retail on the ground level within Hughes Landing, providing panoramic views of Lake Woodlands. Both multifamily developments are set in a walkable setting with retail, dining and entertainment nearby.

HAA is the leading advocate, resource and community partner for quality rental housing providers in the Houston and surrounding area. HAA develops leadership in the multifamily industry by engaging broadly diverse membership, embracing effective technology and advocating for a geographically inclusive association.

The Howard Hughes Corporation owns, manages and develops commercial, residential and mixed-use real estate throughout the U.S. Its award-winning assets include the country’s preeminent portfolio of master planned communities, as well as operating properties and development opportunities including: the Seaport District in New York; Columbia, Maryland; The Woodlands, The Woodlands Hills, and Bridgeland in the Greater Houston, Texas area; Summerlin, Las Vegas; and Ward Village in Honolulu, Hawaiʻi. The Howard Hughes Corporation’s portfolio is strategically positioned to meet and accelerate development based on market demand, resulting in one of the strongest real estate platforms in the country. Dedicated to innovative placemaking, the company is recognized for its ongoing commitment to design excellence and to the cultural life of its communities. The Howard Hughes Corporation is traded on the New York Stock Exchange as HHC. For additional information visit www.HowardHughes.com.