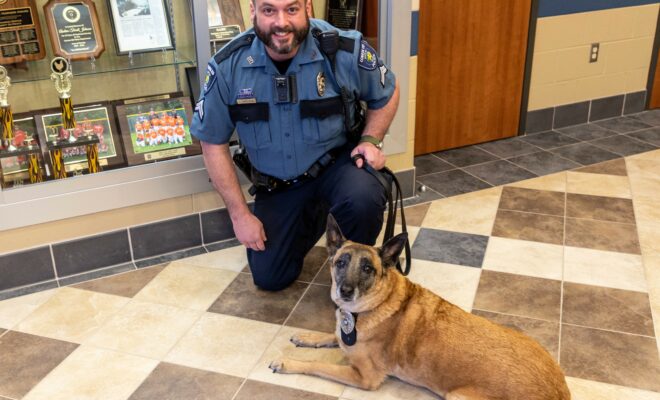 Seated back in his swivel chair with a frayed tennis ball in hand, Officer Joel Armstrong is smiling. The smile comes from deep within, running behind his eyes and through his teeth, and you might wonder where he finds that joy. Your eyes are drawn to the bright yellow orb rolling in his palm, and your gaze is matched by Fila, the 11-year-old German Shepherd seated placidly at his feet.

Even when Officer Armstrong and Fila are the only other ones in the room, you feel like you are intruding on something deeply intimate and personal, the companionship between them so obvious and intense that it does not need to be picked apart and explained but just witnessed. After nine years on the drug search job for the Conroe ISD police department, Fila is up for retirement. Officer Armstrong cleanly states that this is something to be celebrated, not mourned.

Fila was reared in Holland, and her name means “free spirit” in Dutch. You might immediately get the sense that her name is almost too on-the-nose, her ears perked to the heavens, eyes widened and sharp, and legs strong from running wild. Officer Armstrong says Fila is intelligent, both traditionally and emotionally. When he started to train her to find drug hides – part of the standard K-9 training practices – he realized that he had to get creative. The ever-cunning Fila would always find a loophole, some way to “cheat” through the task. She would slyly watch him place it or analyze his footsteps.

Eventually, Officer Armstrong had enough of Fila’s antics, hiding the drug stash in an air vent high in the ceiling. Checkmate, he confidently thought. What he did not realize, however, was that Fila was so perceptive that she could pinpoint and interpret little erratic changes in his body language. She saw his eyes flickering to the ceiling every once in a while, so she tracked precisely where he was looking and stared straight up at the “hide” to show that she knew exactly what he did. Your move, she seemed to respond.

Officer Armstrong jokes that Fila is at the top rung of the ladder in his house, cutting off the question “Do you like Fila more than…” with an immediate yes. But even when he laughs off the question, you do not get the sense that he is exaggerating with his answer. You can tell by how he looks at her that he feels off-kilter when she is not there. You can tell that whenever he is driving along in his car, he suddenly checks and wonders where she is before realizing she never hiked on. You can tell that there is a language between them that only they can speak, their little game of cat-and-mouse – or should I say man-and-dog – played with a smile. Officer Armstrong confides in and trusts Fila, and she loves him for it.

Joy is infectious here at the station, and you now understand the source of it, feeling that same smile you saw plastered on Officer Armstrong’s face tug at your lips. Fila’s journey—crossing the vast blue ocean, finding her home with Officer Armstrong, showing the utmost intelligence and bravery in her searches—will not end with her “retirement.” It will only bring a new chapter of Fila being perfectly herself. Thank you for your service, Fila.

This story was written by Siddhanth Pachipala, Senior at the Academy of Science and Technology at The Woodlands College Park High School as part of a partnership between the Conroe ISD Communications Department and Education for Tomorrow Alliance Summer Internship Program.