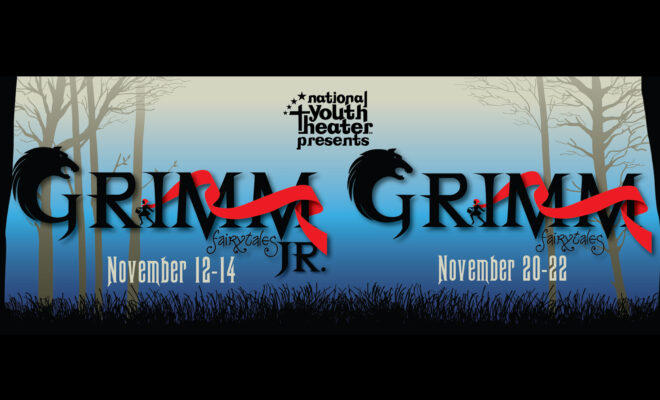 THE WOODLANDS, TX – National Youth Theater (NYT) announces their upcoming productions of Grimm Fairy Tales Jr. (junior cast) and Grimm Fairy Tales (older cast), a story about a young girl named Red and her adventures in the town of Happily Ever After. NYT will be the first to perform these shows in the great state of Texas!

In Happily Ever After, the town is populated with characters from the Grimm Fairy Tales—numerous Prince Charmings, dwarves, the Frog Prince, and many princesses, including Snow White, Cinderella, and Rapunzel, to name a few. Rumplestiltskin, along with three witches—The Queen, from Snow White’s story, Carabosse, from Rapunzel’s story, and Lady Damara, the evil step-mother from Cinderella’s story— begin wreaking havoc on the town by rewriting everyone’s “happily ever after.” Rapunzel is now tone deaf, a brave Prince Charming is terrified of his own shadow, Snow White hates dwarves, and they’ve stripped the Fairy Godmother of her magic, stopping Cinderella from attending the ball.

Tickets can be purchased online at nationalyouththeater.org/ticketing. Online tickets are $15; at the door tickets are $18; and groups of 15+ are $12.

National Youth Theater (NYT) is a Christian Ministry with the mission of engaging students in life changing experiences through the performing arts. NYT’s goal is to help encourage and grow kids to become confident, engaged Christian adults. NYT provides an environment that encourages a sense of belonging and promotes training to recognize, honor, and acknowledge the gifts of each child.