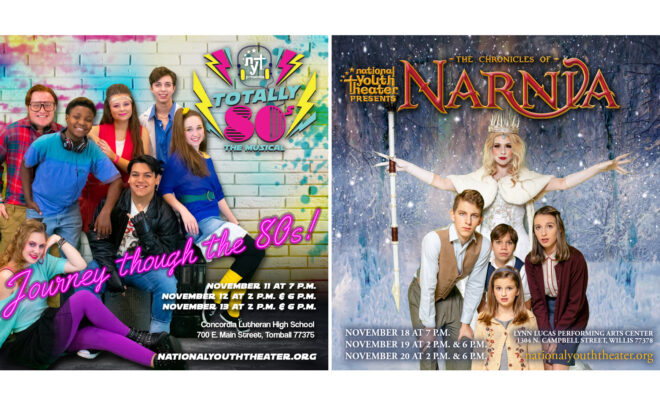 THE WOODLANDS, TX – National Youth Theater (NYT) announces their upcoming productions of Totally 80s, The Musical and Narnia. Come journey back to the 80s and then enter the magical land of Narnia.

Totally 80s, The Musical is a totally tubular comedy musical that follows a group of friends who come of age during the 1980s, when Ronald Reagan was president, the Berlin Wall came down and the hits of Madonna, Genesis, Sting, Duran Duran and Michael Jackson filled the airwaves. This high-energy show features a neon-colored combo of comedy, nostalgia and a fantastic soundtrack of top ‘80s music. It’s a celebration of all things Gen X that people from all generations will enjoy.

NYT will be the first to perform this show in the great state of Texas!

Narnia, The Musical is a dramatization of The Lion, the Witch and the Wardrobe, the first and most famous of acclaimed British author C.S. Lewis’s world-renowned series, The Chronicles of Narnia.

It tells of four English schoolchildren – brothers and sisters – sent away from London during World War II to stay in the manor house of their uncle – who stumble upon (and through) a wardrobe into the magical kingdom of Narnia, held in the power of the White Witch, whose evil spell has frozen the land, so that it is “always winter – and never Christmas.” They are embraced by the talking animals, the good Narnians who resist the Witch’s evil and await the return of Aslan – the Great Lion, who is their rightful ruler. Aslan, who has long been absent from his land (so that some have even doubted his existence) has – at last! – returned, to confront the Witch, and the children are soon caught up in a fierce struggle of good versus evil.

In this spellbound landscape, filled with creatures of myth and fable, the children face temptation and fear, but learn deep lessons of courage, unselfishness, and wisdom that help them grow in spirit and prepare them for life in our world.

Tickets can be purchased online at nationalyouththeater.org/ticketing.

Narnia is produced by special arrangement with The Dramatic Publishing Company of Woodstock, Illinois.

National Youth Theater (NYT) is a Christian Ministry with the mission of engaging students in life changing experiences through the performing arts. NYT’s goal is to help encourage and grow kids to become confident, engaged Christian adults. NYT provides an environment that encourages a sense of belonging and promotes training to recognize, honor, and acknowledge the gifts of each child.