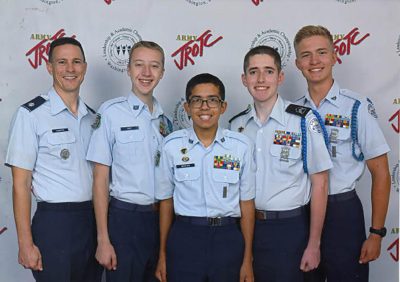 THE WOODLANDS, TX – After battling a total of 578 teams, The Woodlands High School Air Force Junior ROTC’s (AFJROTC) Junior Leadership and Academic Bowl (JLAB) team moved to level two of competition and then finals, finishing 3rd in the nation this summer in Washington, D.C.

“There are 578 teams in level one of competition in the fall, and 305 in level two, and only 17 teams in the finals over the summer,” Lt. Col. Chris McMartin, JLAB team instructor, said.

AFJROTC Junior Leadership and Academic Bowl is a cadet-run competition only relying on instructors if needed.

Senior Spencer Snarr was the commander of the JLAB team going to Washington DC for nationals. “Spencer Snarr led the team and got them prepared,” said Lt. Col. McMartin. “The hard work paid off because we are third in the nation.” The team included Snarr, Jonathan Yost (senior), Eli Herman (junior), and Lucas Mohler (Junior).

While preparing for competition, all of the cadets on the team are also involved in many other AFJROTC activities including, but not limited to: Marksmanship, Orienteering, Aerospace and PT. “They excel in many areas, and the academic portion is only one of their commitments in AFJROTC. Other schools have cadets focused only on academic team,” Lt. Col. McMartin said.

After placing fourth at nationals the year before, with the help of two returning members, the team practiced the hardest they ever had. “We would come in during the summer to do a mock tournament with past bowl questions,” Snarr said.

The team felt that they were well prepared for the competition after many mock tournaments and endless studying. At the bowl, “there were some things we excelled in and some we didn’t,” said cadet Eli Herman.

Even after endless hours of practicing with the buzzers and studying, it comes down to who can press the buzzer first. “You don’t get points for knowing the information, but for knowing it and buzzing in first,” Snarr stated.

Although they got third place, they are proud to be the number one team in Texas and hope to win gold next year, according to Lt. Col. McMartin.