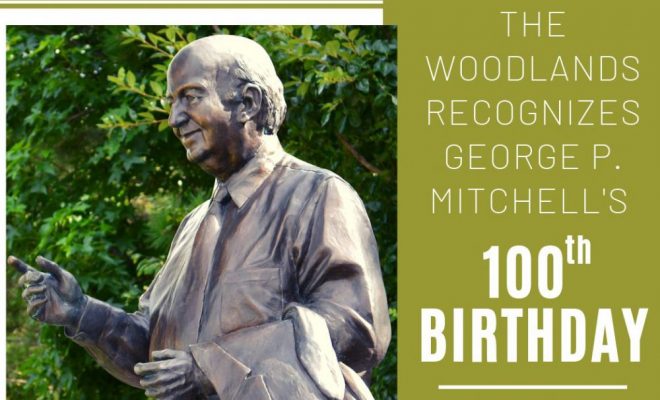 THE WOODLANDS, TX – The Woodlands Township recognizes what would have been the 100th birthday of its founder, George P. Mitchell, on Tuesday, May 21, 2019.

Mitchell, who passed away in July 2013, celebrated the opening of The Woodlands on October 19, 1974. As The Woodlands celebrates its 45th anniversary this year, the award-winning community has been one of the best-selling master planned developments in the United States since 1990. Mitchell envisioned a forested community where residents could live, work, play, and learn, combining environmental preservation to the mix. His vision has gained international praise.

A graduate of the class of 1940 at Texas A&M University, Mitchell was an oil legend and set up Mitchell Energy in The Woodlands, which he sold in 2002.

Mitchell was born to Greek immigrant parents in the port city of Galveston, Texas on May 21, 1919. Mitchell died at the age of 94 on July 26, 2013, at his home in Galveston of natural causes, while surrounded by relatives.

In the early 1960s, Mitchell began acquiring land north of Houston, Texas to develop a place for mixed-income residential development with jobs and amenities nearby while preserving the East Texas forest and other natural resources that covered the 27,000 acres. He later would call it his most satisfying achievement.  “He had the right mix of vision, optimism and tenacity, and a love for his fellow man,” the Mitchell family says on the GPM Foundation website. “There’s no doubt that he helped make this world a better place.”

Today, The Woodlands has over 2,000 businesses, a residential population of approximately 118,000 people, and has millions of visitors each year for shopping, dining and entertainment. The Woodlands features one of the nation’s busiest outdoor performing arts and entertainment venues that carries his wife’s name, The Cynthia Woods Mitchell Pavilion. Mitchell was the founder and strong believer of Interfaith, which serves thousands of residents each year.

“This exceptional community that we enjoy as residents is the result of one man’s extraordinary vision of the ideal place to work, play, live, and prosper, and that man is Mr. George Mitchell,” says Township Chairman of the Board Gordy Bunch. “On behalf of The Woodlands Township Board of Directors and employees, we would like to take a moment of thanks and celebrate a wonderful man on his 100th birthday.”

The Woodlands Township Board of Directors recently passed Resolution 007-19 in support of Texas House Bill 2571 that would further honor the legacy of Mitchell by designating the portion of Interstate 45 between State Highway 242 and the Harris-Montgomery county line as the “George P. Mitchell Memorial Highway.” Interstate 45 serves as the gateway to The Woodlands, which over its more than four decades has grown to fulfill Mitchell’s original vision for a thriving, sustainable community. House Bill 2571 was authored by Representative Steve Toth who represents The Woodlands in Austin, co-authored by State Representative Will Metcalf and sponsored by State Senator Brandon Creighton who represents South Montgomery County in the Texas Senate. The legislation has passed the Texas House of Representatives and is currently on the Senate local calendar awaiting final approval.

Mitchell and his wife Cynthia, along with the Cynthia and George Mitchell Foundation, had distributed or pledged more than $400 million in grants to causes, programs and institutions. The vast majority of this amount is related to science, environmental issues, and science-related fields, including the foundation’s current grant-making programs which focus on sustainability science, clean energy, water, and natural gas.

On December 7, 2010, he joined the Giving Pledge, sponsored by Warren Buffett and Bill and Melinda Gates, making public his and Cynthia’s long-held private intent that the majority of their wealth would be donated to charitable causes.