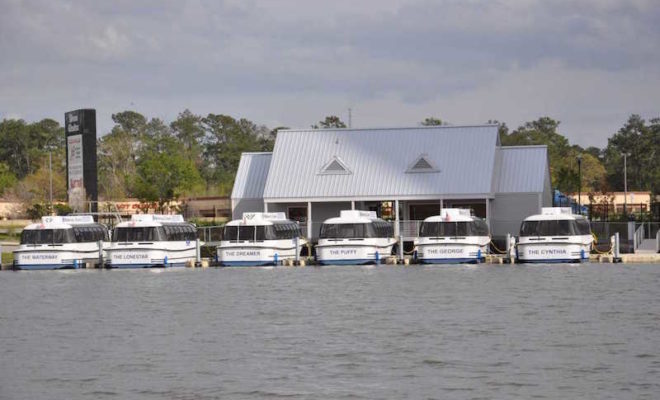 Cruisers to be removed from The Woodlands Waterway

THE WOODLANDS, TX – The Woodlands Convention & Visitors Bureau (CVB), which markets under the name of Visit The Woodlands, gave authorization to its president to negotiate a process to remove six (6) Waterway Cruisers that have not been in operation since Hurricane Harvey.

The Cruisers had been in operation on The Woodlands Waterway in The Woodlands, Texas for the past fifteen (15) years until Hurricane Harvey hit. Since that time, The Woodlands CVB has been reviewing various options associated with Cruiser operations and the boats. The Woodlands CVB officials have declined to put additional monies into the 15-year old boats, which need refurbishment in the range of tens of thousands of dollars for each boat. For the past several years, The Waterway Cruisers have operated out of a marina owned by Brazos Transit District located at the corner of Lake Robbins Drive and the southbound feeder road of Interstate I-45 in The Woodlands Texas.

“While the boats have been an iconic symbol of The Woodlands for 15 years, they were determined to have a net negative value,” said Nick Wolda, President of Visit The Woodlands. “We conducted a very public process including an aggressive Request for Interest process to find a suitor for the six boats and have found a company that will take them.”

Wolda said the removal process would happen sometime this fall, looking at the end of September or early October.

Wolda said the organization, in support of its mission to bring tourism to The Woodlands, continues to help guide dialogue of whether a boat operation on The Woodlands Waterway is feasible and wanted.

“We are exploring if there is a strong, viable, collective solution with developers, investors, and interested entities to continue boat service on The Woodlands Waterway,”Wolda said. “We believe it should be a collective effort.”

Boat service first began as a private operation by Water Taxi, Inc. of Fort Lauderdale, Florida in 2004. For several years, The Woodlands Development Company owned and operated the boats until the company gifted them, free of charge, to The Woodlands CVB, a 501 (c) (6) organization responsible to position The Woodlands as a regionally, nationally and internationally recognized destination for leisure, convention and business travel. The boats were operated until, mid-2017, and after being damaged by 50+ inches of rain by Hurricane Harvey, the boat operation concluded after 15 years of service. The Waterway Cruisers logged over 434,000 trips along The Woodlands Waterway.

Tourism is an important part of the economic viability of The Woodlands. According to the Office of the Governor of Texas, tourism generates almost $300,000,000 in visitor spending, 3,770 in total employment and $25,800,000 in state and local tax revenue. The Woodlands has over 11 million square feet of shopping, dining, hospitality and entertainment, including 14 hotels with 2,250 rooms each night of the year.

The Woodlands Waterway is a key component of tourism and is still very much in development mode with numerous tracts of land yet to be developed for residential living, dining, corporate office, hospitality and entertainment, Wolda said.

The Waterway has two sections (lower and upper) and only the upper section has had boat service. The lower portion has kayak and paddleboard rentals. The Woodlands Township introduced Swan Boats on the upper portion of The Woodlands Waterway to create programming for residents and visitors.