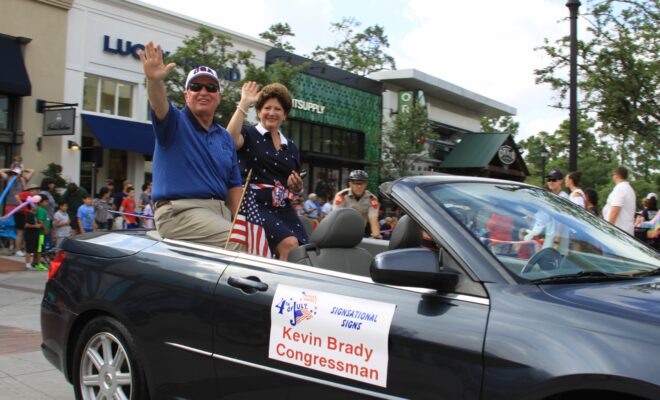 THE WOODLANDS, TX – The annual South County 4th of July Parade: STRONGER TOGETHER, will be held Monday, July 4th, 2022 at 9:00 a.m. with the singing of the national anthem from the balcony in Market Street and at Town Green Park.

More than 20,000 spectators will line the streets to celebrate in Town Center along the 1.3-mile parade route with floats including entertainers, marching bands, elected officials & dignitaries, fire engines, and military members.

Prior to the parade, street performers and The Woodlands Concert Band will entertain parade goers in Market Street. We offer special seating for seniors & handicapped.

The parade is funded through community donations and would not occur without the support of The Woodlands Township. The parade is produced with help from 200 volunteers, including special guest announcers in booths located in front of Town Green Park, The Cynthia Woods Mitchell Pavilion and 24-Hour Fitness. Community Judges score the entries to culminate in 12 Parade Entry Awards. For more information about the event visit www.facebook.com/4thOfJulyParade.

Market Street Stage (Above North Commons on the Balcony)