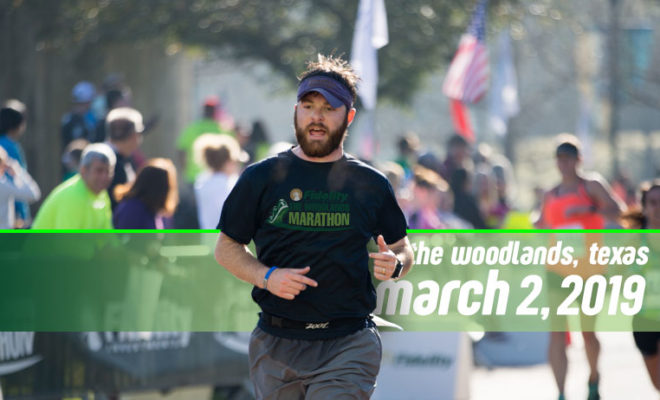 5,700 Athletes ready to race in The Woodlands Marathon

By The Woodlands Marathon Management | March 1, 2019

THE WOODLANDS, TX – Fidelity Investments The Woodlands Marathon race director Willie Fowlkes has two sets of constituents to please on race day: the residents of The Woodlands Township and the runners from 43 states, the District of Columbia and 10 countries who will descend Saturday on Montgomery County for this year’s eighth annual races, which includes the Houston Methodist The Woodlands Half Marathon.

Nearly 5,700 runners – including approximately 500 on various two-person and four person relay teams – have registered and are expected to toe one of the two starting lines at 7 a.m. near Town Green Park.

While working with the Commissioner’s Office of Montgomery County Precinct 3 to balance the community’s mobility needs on race day, Fowlkes still manages to put together a course that brings in some of the fastest of the fast.

“We are fortunate to offer a course that is considered one of the fastest in Texas, the South and the country,” Fowlkes says. “Last year, our half marathon broke the Canadian women’s half marathon record and the course is set up with three long straightaways. More importantly, our marathon course is IAAF-certified and a Boston Marathon qualifier. We should see close to 10% of our marathon field qualify.”

The men’s marathon favorite is 28-year-old Kenyan Enock Mirir, who won last September’s IMT Des Moines Marathon in 2:23:39 and has also recorded seventh and third place finishes in Philadelphia and Birmingham in November and February, respectively.

Pushing Mirir will be 40-year-old Ryan Parrish from Fulshear and 33-year-old Adam Higham of Collierville, Tennessee.

Parrish, who ran collegiately for Eastern Kentucky University, posted personal bests at the California International Marathon in December – stopping the clock in 2:31:22 – and following it up four weeks ago with a 1:11:56 win in the Katy Half Marathon.

Higham was third this past December at the Rocket City Marathon in Huntsville, Alabama off of a 2:29:15 effort. The former Southern Virginia University runner owns a pair of second-place finishes at the St. Jude Marathon in Memphis, Tennessee in 2016 and 2017.

The women’s marathon may be decided between two athletes who were on the race’s podium two years ago.

2017 overall champion Melissa Hopper, 41, of Cypress, returns for her fifth consecutive appearance here at The Woodlands Marathon, while Bellaire’s Jackie Tobin, 39, will be competing in her first marathon since finishing two spots behind Hopper that year. Hopper, third a year ago behind Camille Herron and Heidi Bock, is fresh off a 2:57:05 showing at the Chevron Houston Marathon in mid-January.

New to the race is 36-year-old Phoenix, Arizona native Nicole Bitter. She improved upon her 3:08:21 at last December’s California International Marathon with an eighth-place overall 2:55:30 showing at this month’s Phoenix Marathon, which she followed a week later with a 1:23:39 win at the Lost Dutchman Half Marathon in Apache Junction, Arizona.

In the Houston Methodist The Woodlands Half Marathon, Canada once again is expected to be well-represented in the women’s field as Rachel Cliff won the race a year ago with a new Canadian half marathon record of 1:10:08.

The spotlight is expected to shine on Boise, Idaho’s Kinsey Middleton, who holds dual Canadian-American citizenship.

Expecting to chase Middleton are a pair of former collegiate runners who are starting to make their marks on the road – Allie Schaich and Melissa Fairey, who ran for Rice and Georgia Tech, respectively. The duo ran 1:15:40 and 1:16:19, respectively, at January’s Aramco Houston Half Marathon and chased each other to third- and fourth-place finishes at the ConocoPhillips Rodeo Run 10K in Houston with times of 36:42 and 36:53. Schaich won the Santa Rosa (California) Marathon last summer in 2:50:20 in her marathon debut while Fairey posted an initial 2:52:28 showing at the distance at last October’s Chicago Marathon.

On the men’s side, defending champion Geoffrey Speelman, 26, of The Woodlands, returns having improved upon last year’s winning time of 1:09:24 at January’s Aramco Houston Half Marathon where he finished in 1:08:32. Speelman, who owns three of the top 12 times in history of The Woodlands-based Ten For Texas 10-Miler and a pair of YMCA Run Thru The Woods 5-Mile wins in 2016-2017, will be the hometown favorite, but Aurora, Colorado’s Gabe Cuadra and Dallas’ Joseph Hale will challenge.

Cuadra, a Friendswood native who ran for the Rice Owls, won the American Discovery Trail Marathon in Colorado Springs last September in 2:31:03 and was fifth overall at the Rock ‘N Roll Denver Half Marathon the following month in 1:10:30, while Hale wrapped up a successful 2018 with a fourth-place overall finish at December’s BMW Dallas Marathon. The 25-year-old former Dallas Baptist University runner ran the Dallas course in 2:30:32 – just shy of his 2:28:28 personal best at the Chevron Houston Marathon in January 2018 – and prepped for it with a personal-best 1:09:50 win at the McKinney Half Marathon in early November.

Thirteen marathoners and 20 half marathoners will be looking to complete their eighth race at the same distance on Saturday after having finished each of the race’s first seven years from 2012-2017.

A number of physically challenged athletes with Houston’s Team Catapult will be competing in the half marathon.