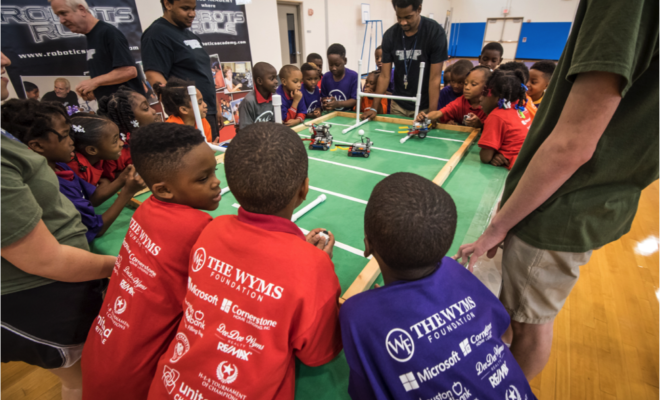 The Wyms Foundation is sponsoring the ON & OFF Camp for youth in Montgomery County and the Houston Area on July 29th at Gerald Irons Junior High. On & Off Camp is free camp designed to expose kids to resources that will help them maximize their potential in athletics and career development.

The camp will feature virtual training from NFL Superstar J.J. Watt of the Houston Texans and NBA ALL-PRO Paul George of the Oklahoma City Thunder. The classroom portion will feature fun and interactive software coding and video game design programs designed by Microsoft. There will also be presentations on the subjects of Financial Literacy, STEAM Careers, Athletic Training and Nutrition. The camp is free and all participants will receive a free backpack and school supplies for the upcoming school year. To sign-up go to www.thewymsfoundation.org and click the events tab. 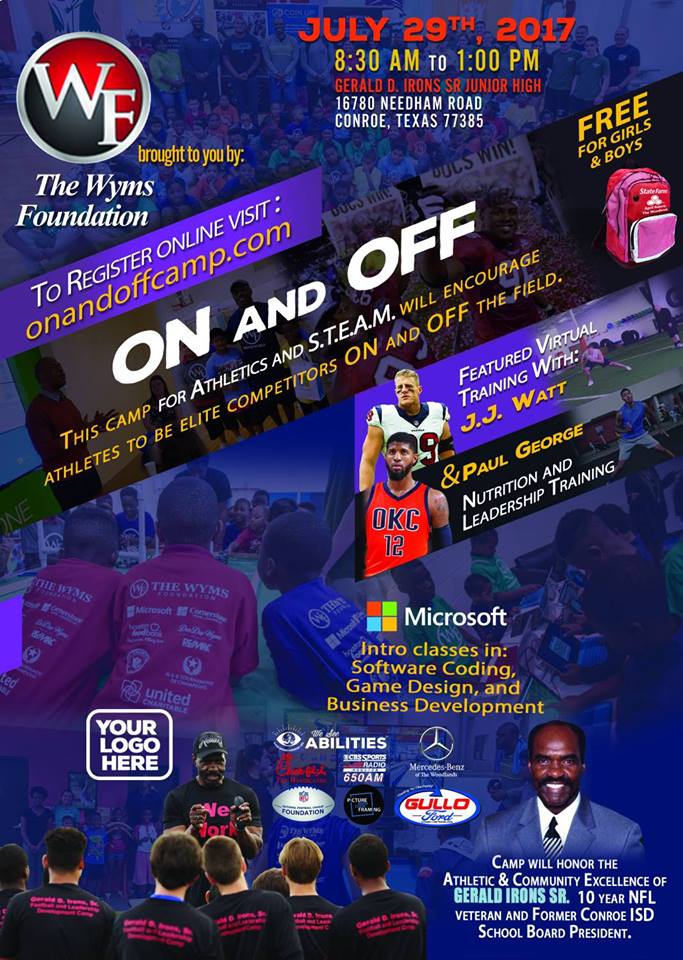 The event will also honor the legacy of Mr Gerald Irons Sr. Gerald Irons, a former NFL football player who played 10 seasons for the Los Angeles Raiders and the Cleveland Browns.  Gerald earned his master’s degree in Business Administration from The University of Chicago, during 6 off-seasons, while playing professional football as a linebacker for the Oakland Raiders. He attended John Marshall Law School at night, while playing linebacker with the Cleveland Browns for 4 years. After 10 years in the NFL, he retired from football and moved his family to Texas. Irons was Senior Vice President of Business Development with Conine & Associates, Commercial Real Estate Advisors. He represented commercial real estate on behalf of The Woodlands Development Company.

Irons is a past president of the Conroe Independent School District Board of Trustees and served on the CISD Board for 19 years until his term expired in 2012.

Irons has been married for 44 years to Myrna. They have raised three sons, all graduates of Conroe ISD high schools. All five members of The Irons Family were selected and honored by The Woodlands residents as “Original Hometown Heroes” at The Woodlands 25th Year Celebration

Because of his work in the community, a new junior high was dedicated to him. Gerald D. Irons Junior High School educates over 1100 students in The Woodlands, Texas.

The camp is being designed and produced by The Wyms Foundation. The Wyms Foundation was founded by former NFL player Ellis Wyms. Ellis had a 8 years playing career with the Tampa Bay Buccaneers, Seattle Seahawks and Minnesota Viking. He became a Super Bowl Champion with the Tampa Bay Buccaneers in 2003. The focus of The Wyms foundation is to provide computers and software to community centers and after school programs for STEAM Education (Science, Technology, Engineering, Arts, and Math. They also provide fitness gaming systems for youth in those centers to fight Childhood Obesity.

The goal of The Wyms Foundation is to expose youth to the skills they need to be productive in the job market.