Carlo’s Bakery Opening in The Woodlands

Buddy Valastro and the famiglia will be opening Carlo’s Bakery on Saturday, February 18th, at The Woodlands Mall in The Woodlands, Texas. Carlo’s is a family owned bakery featured on the TLC hit show Cake Boss and is known for their delicious pastries, desserts & cakes.

A ribbon cutting and grand opening is scheduled to begin at 8:30am. The doors will open to Carlo’s Bakery shortly after the ceremony, ready for guests to enjoy baked fresh goods.

Carlo’s, originally opened by Carlo Guastaffero in 1910, was acquired by Bartolo Valastro Sr. in 1964. Since the untimely passing of Bartolo Sr. in 1994, matriarch Mary Valastro and her children Grace, Maddalena, Mary, Lisa and master baker Bartolo Jr. “Buddy” Valastro have expanded the business with the help of their spouses. 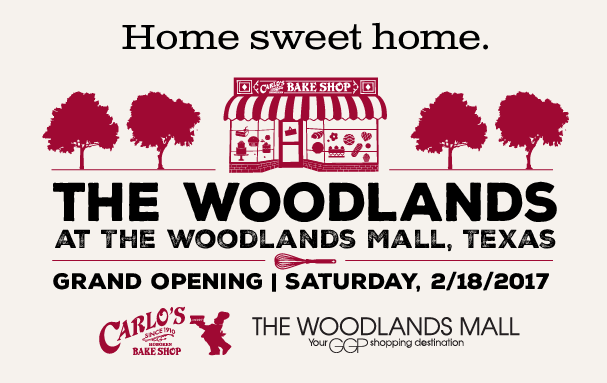