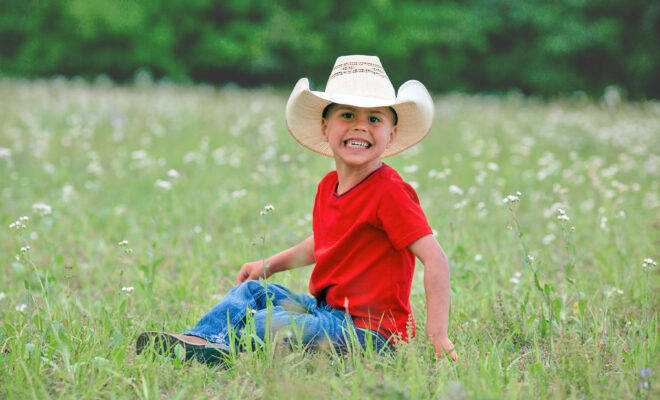 Born with half of a heart, doctors warned CT might not survive infancy. Today, the full-of-life 5-year-old is thriving, and the Katy-area Griffin Family celebrates an important milestone.

CT was the featured survivor at the 2020 Montgomery County Heart Ball and his original art was auctioned to the highest bidder with help from KTRK’s Ted Oberg, who emceed the event. CT’s Mom, Kayla, even joined the American Heart Association staff in 2019 and works tirelessly to raise funds and advance the mission of the organization, with a special focus on congenital heart defects. Kayla is the lead for the Northwest Harris County Heart Walk taking place October 16 at Lone Star College.

Watch C.T.’s story featuring an interview with Kayla, Carl, and C.T. in the video below produced by Branch Media:

CT Griffin lived the first eight months of his life in a hospital and had five open heart surgeries before his first birthday. Despite the odds, CT is now a normal five-year-old preparing to start kindergarten. “This moment means the absolute world to me and Carl,” said Kayla Griffin, CT’s mother. “When CT was born, we were told he wouldn’t make it to his first birthday. Now here we are five years later. Living life to the fullest with our big boy starting kindergarten and thriving in life.”

The harrowing tale of CT’s first year of life begins like most normal birth stories. In June 2016, Kayla and Carl Griffin were ecstatic about the arrival of their new baby, Carl Thomas (CT). As far as they knew, he was a perfectly healthy little boy, but less than 24 hours after coming home from the hospital, Kayla noticed something was off. CT was breathing rapidly, felt clammy, and wasn’t crying. Was she just being a paranoid first-time mom? She wasn’t taking any chances.

After being seen by several rounds of doctors, his prognosis was dire. CT needed to be transferred to a larger hospital, but the doctors weren’t certain he would survive the 40-minute helicopter ride. The Griffins were advised to say their goodbyes before takeoff. Thankfully, CT survived the trip.

Doctors diagnosed CT with Hypoplastic Left Heart Syndrome (HLHS), a defect in which the left side of the heart is severely underdeveloped. Doctors were able to balloon a valve open and blood started flowing. Kayla and Carl were told CT would need three open-heart surgeries to prolong his life into adulthood.

CT had a stroke on the operating table during his third surgery and had to remain on a ventilator. The Griffins applied for a heart transplant but were denied. They decided to perform a fourth surgery, The Glenn Procedure – CT’s last shot to breathe on his own. The procedure was a success and proved CT could breathe on his own. CT was admitted to Texas Children’s Hospital and after 27 days was finally able to go home, breathing on his own. CT didn’t end up needing a new heart.

By all accounts, CT is now a “normal” HLHS patient and an active five-year-old. Even though he fights a battle every day, he is full of life and loves fishing, hunting, roping with his “lasso”, swimming, and water balloon/water gun fights. CT had another critical open-heart surgery in September of 2020 to help strengthen his heart as he grows into adulthood when he will eventually need a heart transplant.

CT was the featured survivor at the 2020 Montgomery County Heart Ball and his original art was auctioned to the highest bidder with help from KTRK’s Ted Oberg, who emceed the event. CT’s Mom, Kayla, even joined the American Heart Association staff in 2019 and works tirelessly to raise funds and advance the mission of the organization, with a special focus on congenital heart defects. Kayla is the lead for the Northwest Harris County Heart Walk taking place October 16 at Lone Star College.

The Griffins know that CT probably wouldn’t be here without the funding and research provided by the American Heart Association, which is the largest funder of cardiac research outside the federal government. They believe that every birthday is a gift. Every developmental milestone a moment to cherish. This September, when CT joins other five-year-olds for his first day of school, it is a reminder of just how far they’ve come and the bright future that lies ahead thanks to the advancements in treatment for heart defects.

“CT is so incredibly wise beyond his years,” said Kayla. “He has half a heart and twice the fight! We are so eager to see his light shine more and more as the school year continues.”

American Heart Association (AHA) is devoted to saving people from heart disease and stroke – America’s number one and number five killers. That includes identifying and removing barriers to and improving quality of life. People with positive mental health are more likely to have health factors linked to a lower risk of developing heart disease, such as lower blood pressure, less inflammation and lower cholesterol.

The American Heart Association is a leading force for a world of longer, healthier lives. With nearly a century of lifesaving work, the Dallas-based association is dedicated to ensuring equitable health for all. We are a trustworthy source empowering people to improve their heart health, brain health and well-being. We collaborate with numerous organizations and millions of volunteers to fund innovative research, advocate for stronger public health policies, and share lifesaving resources and information. Connect with us on heart.org, Facebook, Twitter or by calling 1-800-AHA-USA1.