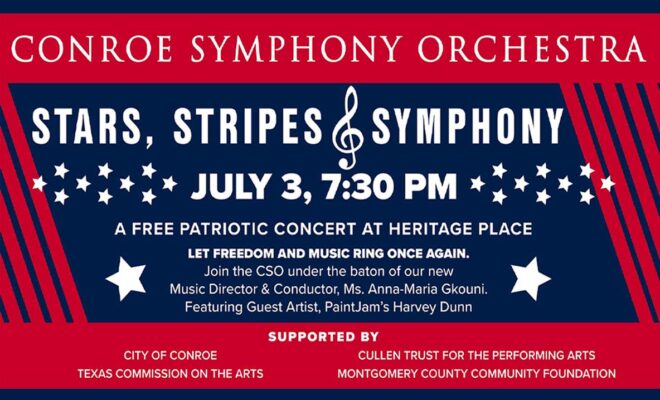 CONROE, TX – Let freedom and music ring once again. The Conroe Symphony Orchestra, under the direction of its new Music Director & Conductor, Ms. Anna-Maria Gkouni, presents a FREE Patriotic Concert, Stars, Stripes & Symphony on July 3 at 7:30 P.M. at Heritage Place in downtown Conroe. Guest artist, Harvey Dunn, of PaintJam will accompany the orchestra with a special artistic tribute to Independence Day. The concert also includes a Super Hero Cape Parade for kids and a tribute to the Armed Forces.

This concert will feature a versatile selection of American composers. “Celebrating American culture, we’re pleased to present to our audience a range of all-time favorite American patriotic music, jazz and ragtime inspired selections, as well as film and famous Broadway tunes,” said Music Director & Conductor, Anna-Maria Gkouni. “I’ve been waiting for this moment for such a long time as have been all of our players and we can’t wait to be playing music for the community again. We know music has been missing from our community and this will be a stirring, musical homecoming for all of us.” This is one of the favorites of the concert season with music for every family member.

Accompanying the orchestra is Guest Artist, Harvey Dunn of PaintJam, painting with a unique twist. Dunn will perform alongside the CSO during  America the Beautiful and the Armed Forces Salute. Dunn wields an extraordinary paint brush and with talented, swift strokes brings an entertaining, and artistic surprise element to the night.

Plus, kids can take part in a Super Hero Cape Parade kicking off the night with a march through Heritage Park alongside Ben Franklin and George Washington. Children ages 3-10 are invited to wear a super hero cape from home or create one at a special activity table, which opens at 7 p.m.

Stars, Stripes & Symphony is free and open to the public. Heritage Place is located at 500 Collins Street in downtown Conroe. Bring a chair or blanket and get ready to share in a truly memorable community event, celebrating freedom, music, and a shared love of musical arts.

The Conroe Symphony Orchestra was founded in 1997. Since its inception, the Symphony has continued under the baton of several fine musicians including Dr. Robert Zwick, Dr. Don Hutson, Dr. Jacob Sustaita and now Ms. Anna-Maria Gkouni—the orchestra’s first female conductor.  The Conroe Symphony Orchestra was created to add to the cultural enrichment of the community, assuring a better quality of life for the Conroe area.

Anna-Maria Gkouni is a Greek orchestral conductor, pianist, and piano instructor. Her musical interests cover a span of genres, from classical to jazz and traditional music to more electronic and progressive sounds.  A native of Athens, she holds a piano performance and a music theory degree from Philippos Nakas Conservatory. After graduating with her BA from Ionian University in Corfu, a Greek island, Gkouni moved to Nebraska to pursue her MA in Orchestral Conducting from the University of Nebraska-Lincoln and currently she is pursuing her Doctor of Musical Arts in Orchestral Conducting at the University of Houston.

The Conroe Symphony Orchestra (CSO) was founded in 1997. Since its inception, the Symphony has continued under the baton of several fine musicians including Dr. Robert Zwick, Dr. Don Hutson, and now continues under the direction of Ms. Anna-Maria Gkouni. The Conroe Symphony Orchestra was created to contribute to the cultural enrichment of the community, assuring a better quality of life for the Conroe area. Its objective is to provide the region with the best possible musical experience, while creating music lovers and connecting community. For more information, visit conroesymphony.org.