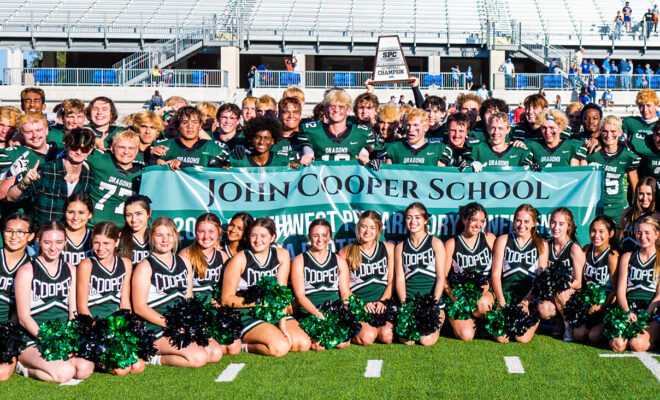 Everyone wants to live in a fairy tale, but don’t forget there are Dragons in those stories.

The fairy tale came to an end for Trinity Valley on Saturday as The John Cooper School Dragons handed them a 63-31 shellacking to finish out their quest for back-to-back SPC 3A Championships. The Dragons finished the year on a nine-win run, routing most opponents and putting a stamp on their journey with the complete dismantling of the Trojans at Panther Stadium.

The Dragons gave up the first points, but then reeled off multiples scores to go into half time up 35-16. In classic fashion, it was only the Dragons themselves who slowed down any Cooper wants, giving hope to the Trojans, before slamming the door with 28 unanswered points in the second half. On a night of lasts for senior Dragons, fans saw perennial Cooper football stars shine brightly one more time before setting off into the sunset.

Senior Vaughn McKeever was sharp all week in practice, all pre-game and decided to have a night for the ages accounting for seven Dragon touchdowns, throwing for five touchdowns on 15-18 passing for 323 yards; he ran in another two touchdowns from short distance adding to the Cooper total. Fans will miss his special connection with fellow senior Kielar Sullivan as once again it was this partnership that kept Cooper opponents on their toes. Sullivan pulled in six catches for 61 yards and two touchdowns, adding another 96 yards on the ground reminding all off his dual threat abilities.

Sophomore Dean Calhoun gave us another glimpse into the future of Dragon football as he ran wild Saturday finding the endzone twice, on 27 attempts for 190 yards and setting yet another Dragon football rushing record. Senior Alonso Barrenchea put the period at the end of the championship sentence with his 65-yard catch for a touchdown to push the Dragon total to 63.

When speaking on the Dragon defense, words rarely do justice. The bend-don’t-break mentality, 11-men-to-the-ball, do-your-job style helped them keep the Trojans flat, only allowing gadget plays to sneak past them for scores. Junior Cole Sheppard was a star and his interception helped redirect the game’s momentum when it looked as though the Trojans were threatening to compete. Junior Jackson Todd forced a fumble to give the Dragon defense another turnover that helped ignite the Dragon offensive fire.

Dragon senior defensive stars like Hayden Hammitt, Owen Baadsgaard, and Carson Berger were their usual selves flying around the field making plays all night. It was a solid return for Alex Roviorosa and Justin Kelly who had been out with injuries but found a way to find their way back to the field to help Cooper finish off their magical run. The Dragon defense held a Trojan offense to below 350 yards for the first time all season while the Dragon offense reeled off close to 700 yards of total offense.

The end is always bittersweet but made palatable when you earn what you worked so hard for. The Dragons’ work was rewarded with another crown – like they say, “the man on the mountaintop didn’t fall there.” Nor did the Dragons, the climb was tough, at times slippery, but through it all Cooper kept their footing to find the second ring for an ever-ascending Dragon football program. Thanks to all the fans who played such a large role in Dragon success, it truly takes a village, and the Cooper community was that village that helped raise another banner for a group that has no plans of letting off the gas. The journey begins again in the spring as the Dragons look for the rare three-peat knowing the bullseye is set squarely on them from here on out. Thanks again to all and…Go Dragons!

“The girls really fought hard today and laid it all out on the course. We had to overcome some adversity with some sickness and injuries, but they showed up,” Head Coach George Dohner said. “I am very proud of their efforts.”

The boys team finished fourth just behind a close battle for the top three teams who were separated by only five points. The boys were once again led by juniors Grey Mendenhall and Aditya Pakal who had strong Top 10 finishes in sixth and ninth place. Senior Nathan Seamans saved his best for last, running a personal-best time of 17:22 to take 20th place. Sophomore Walter Day just missed All-SPC honors in 21st. Freshman, Jacob Bailey finished in 33rd to round the team scores.

“This was again a great team effort from our boys’ team,” Dohner said. “We were strong on the front as usual and had some gutsy performances on the back end. To have a sophomore and freshman step up the way Walter Day and Jacob Bailey did, says a lot about the future of our boys program. And having four of our 10 runners post personal bests in the final meet of the season, doesn’t hurt either!”

“I was pleased with both of our programs and the way they competed today! And I can’t say enough about our seniors. Megan Day, Chloe Smith, and Nathan Seamans, along with the others on the team, have shown tremendous leadership and character this year. They will definitely be missed but leave a great legacy behind, and I can’t thank them enough!”

Fifth Place in SPC 4-A Championship

“The Dragons fell short to a talented Greenhill team in the first round of the 4A SPC tournament,” said Coach Courtney Eckenrode. “Julianne Hon led the Dragons with 13 kills and 19 digs. Finley Wheeler had 20 digs and Lauren Wolford had 25 assists.”

“The Dragons faced Kinkaid for the second time this season and came out on top once again!” exclaimed Coach Eckenrode. “The Dragons were effective in spreading out their offense, with kills from Julianne Hon (11), Grace Minarovic (7) and Summer Galinsky (7). Lauren Wolford ran the offense for the Dragons and tallied 27 assists and 4 aces. Finley Wheeler also tallied four aces along with 18 digs. A great team win for the Dragons!”

“What an exciting way to finish the season! The Dragons played a five-set match where they ultimately came out on top closing out the fifth set with a dominating 15-5 score,” said Coach Eckenrode. “Julianne Hon led the way with 14 kills and 37 digs. Grace Minarovic tallied 11 kills, Rivers Kolesar with eight, Summer Galinsky with eight, and Lauren Wolford had 36 assists, seven kills, and 16 digs to finish her season. Lauren also tallied her 2,500th career assist in this match – congrats Lauren! The Dragons finished fifth in the 4A SPC tournament.”

Founded in 1988, The John Cooper School is a fully accredited, independent, PK-12 college preparatory day school located at One John Cooper Drive, The Woodlands, Texas 77381. For more information, log on to www.johncooper.org or call 281.367.0900.