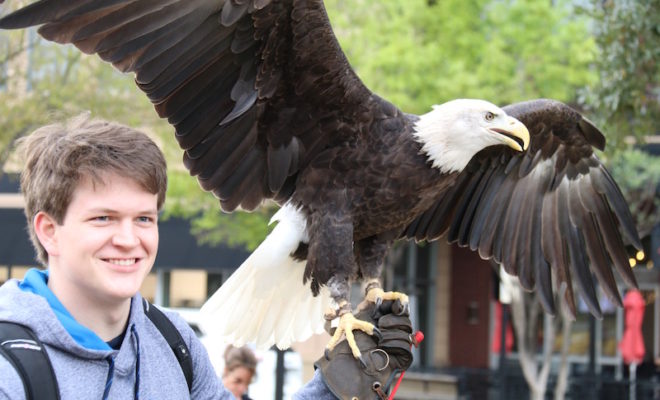 Eagles and Birds of Prey take over Market Street

After the showing of The Eagle Huntress, one of the ten films featured in the recent Inspire Film Festival, at Cinemark in Market Street guests were greeted by a Birds of Prey show featuring live Golden Eagles and Raptors.

Sponsored by The Spirit of Texas Bank, the film follows Aisholopan, a 13-year-old girl, as she trains to become the first female in twelve generations of her Kazakh family to become an eagle hunter, and rises to the pinnacle of a tradition that has been handed down from father to son for centuries. The short film Edges also played, telling the story of Yvonne, a young girl and rose to fame as an international performer in the Ice Capades. She never officially retired, continuing to skate in figure skating competitions until age 90.

The live show allowed festival attendees and Market Street visitors to learn more and get a close look at each of the birds of prey.

…and get a REALLY close look at a Bald Eagle:

View more photos from the event on the Hello Woodlands Facebook page!

Learn more about the Inspire Film Festival and the films at inspirefilmfest.com