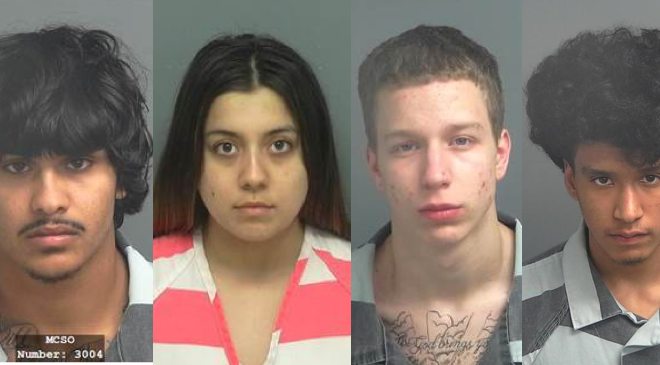 Over the course of several weeks the Montgomery County Precinct 3 Constable’s Office responded to several burglaries of motor vehicles in southern Montgomery County. The burglaries occurred between February 21st and February 28th, 2017 where the group focused on the Imperial Oaks and Legends Run neighborhoods. At this time investigators are able to link the crew to approximately 18 burglaries in this area during this time frame.

Among items stolen during this crime spree were several firearms, investigators are in the process of recovering the stolen property. Members of this group include Alex Righetti of Spring, Sadie Gonzalez of Spring and Kenneth Michalak of Spring and Ramon Ramos of Harris County whom also had multiple outstanding felony warrants out for his arrest when he was taken into custody.

Investigators arrested Righetti and Gonzalez at Righetti’s home in the Legends Run subdivision where they also recovered marijuana and illegal prescription grade narcotics.

All four have been charged with multiple felonies including Engaging in Organized Criminal Activity.