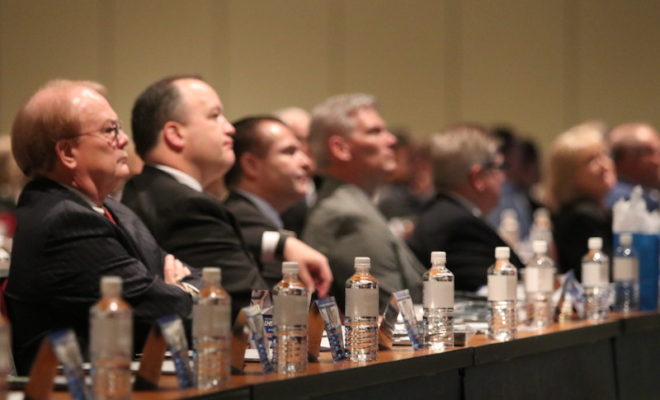 The 32nd Annual Economic Outlook Conference brought together community leaders, corporations, local businesses, and nationally-recognized speakers at The Woodlands Waterway Marriott on Friday, February 16.  The Woodlands Area Chamber of Commerce hosts the Economic Outlook Conference every year to provide valuable insight into the projected growth of the economy in Montgomery County and Texas. This year the theme was a “Resilient Community, Innovative Future” to highlight the economic impact of Hurricane Harvey on Montgomery County, Houston and the surrounding areas.

The conference included a full morning of events from 8 a.m. to 1 p.m. including a community update, regional update, CEO panel, luncheon, networking, and the opportunity to visit vendors and conference sponsors in the lobby area.

During the community update, attendees gained insights about the impact of Harvey and future developments in The Woodlands and Montgomery County:

U.S. Congressman Kevin Brady, United States House of Representatives Serving the 8th District of Texas, challenged attendees to discuss Who Gets to Decide what happens to tax dollars and gave an update on tax reform.

The regional update included speakers Dr. Latha Ramchand, C.T. Bauer College of Business, University of Houston Dean and Professor of Finance, William F. McKeon, Texas Medical Center President & CEO and John B. Jung, Jr., Branch Banking & Trust Senior Managing Director of BB&T Capital Markets that proved the Houston region is still the energy capital and the Texas Medical Center is the largest in the world. The Woodlands is an important asset to both the energy and medical world for the future.

Jim “Mattress Mack” McIngvale, Gallery Furniture Owner and Philanthropist, was the keynote speaker, giving an inspiring speech about Hurricane Harvey and life after the storm.

Learn more about the Economic Outlook Conference and The Woodlands Area Chamber of Commerce at EOCTheWoodlands.com