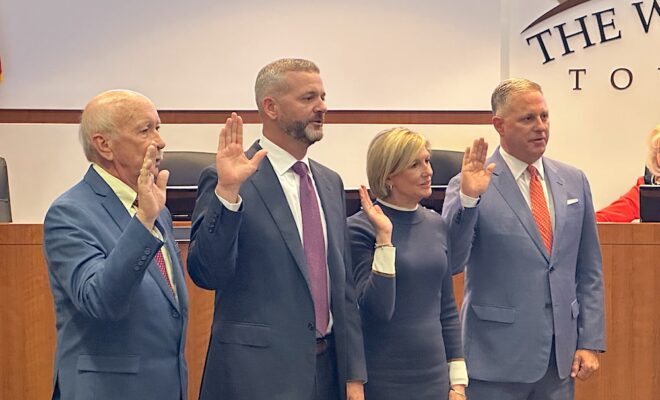 Watch the video of the meeting and view the agenda and presentations on The Woodlands Township website at https://woodlandstx.new.swagit.com/videos/190349.

In the public comment portion of the meeting, residents shared thanks to outgoing board members for their service and welcoming messages to the new board members.

The four outgoing directors were recognized and honored with proclamations, on behalf of Community Leadership Appreciation Day on November 30, for their efforts including Jason Nelson, John A. Brown, Bruce Rieser, and Gordy Bunch.

The Election of Officers for the Board of Directors for The Woodlands Township was then conducted. Nominations were accepted before the vote and the following representatives and positions were elected: Dr. Ann Snyder – Chairman, Kyle Watson – Vice Chairman, Linda Nelson – Secretary, and Richard Franks – Treasurer.

After taking the Chairman seat in the center of the Board, Dr. Ann Snyder shared her thanks to her fellow directors, mentors, community and her husband for their support and being elected Chairman of the Board of Directors.

Reports from the Village Association representatives were received.

Interviews for candidates for appointments to the Development Standards Committee were conducted openly, each candidate giving a speech and members of the Board took the opportunity to ask questions to each candidate and about the DSC. Candidates are running for two positions and three candidates appeared at the meeting in front of the Board. It was then explained by legal counsel Bret Strong that the Township Board has no power over the DRC, with exception of the appointment of the DRC, and compared the DRC as the “supreme court” of covenants and governance.

In the 2022 Parks and Recreation Needs Assessment, the Board approved previously projects in the community including amenities in Capstone Park (Cochran’s Crossing) and Sundance Park (Alden Bridge). The Board voted and approved the proposal from the Public Restrooms Company which includes the project and construction cost of the public restrooms, having an estimated project total of $604,018 or $302,009 per restroom. The Board then approved and awarded a bid for pool chemicals and approved to reject bids received and rebid for reforestation services, tree stock, and tree installation.

The Board recessed to Executive Session to discuss matters, as noted in the agenda, relating to real property, deliberation of economic development negotiations, personnel matters, IT network or critical infrastructure security, and to consult with The Woodlands Township’s attorney.

Once the Board reconvened in public session, Director Dr. Shelley Sekula-Gibbs made a board announcement reminding that on Thursday, December 1 there will be a Regional Transportation Plan Public Meeting will be held from 6-7:30 p.m. at the Magnolia Event Center located at 11659 FM 1488 in Magnolia. The meeting will discuss 2425 regional transportation plan which will include the widening of Research Forest. For more information, visit h-gac.com.

The next The Woodlands Township Board of Directors meeting will be held on December 7, 2022.

Following the regular Township Board Meeting, the Economic Development Zone Board of Directors held a Special Board Meeting. A financial report was presented for the EDZ, including data on Sales Tax. As of September 2022, the EDZ owes The Woodlands Township $4.9 million, which was noted has decreased through the years.