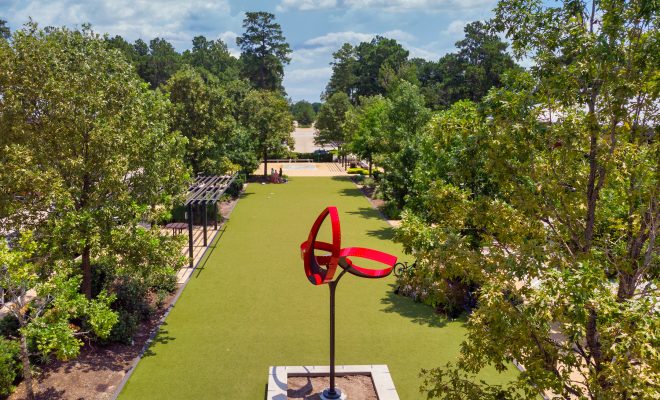 THE WOODLANDS, TX – The Howard Hughes Corporation® has announced the installation of a new custom sculpture, Ibis, for Creekside Park® Village Green in The Woodlands® created by renowned artist Pedro S. de Movellan. Ibis represents a modernistic approach to nature, adding to one of the largest outdoor art collections in the nation, which The Woodlands showcases in the community.

“Our company created the Art Fund in 1973, started by retired employee and community leader, Coulson Tough, under the direction of founder of The Woodlands, George Mitchell. Since that time, we have faithfully contributed to the fund, with over $9 million going towards providing The Woodlands with public art,” said Jim Carman, President – Houston Region for The Howard Hughes Corporation. “This piece in Creekside Park continues this important legacy of supporting public art for our residents in The Woodlands.”

The art committee formed by The Howard Hughes Corporation and Kinzelman Art Consulting selected artist Pedro S. de Movellan, who is represented by Sicardi Gallery in Houston, to create a custom sculpture. Considered one of the world’s most prominent kinetic sculptors alive today, de Movellan lives and works in West Stockbridge, Massachusetts. Each artwork he creates is precisely engineered, elegant in form and ever-changing in motion.

“We, at The Howard Hughes Corporation, commissioned this new work of art by the talented Pedro S. de Movellan to add to our collection of outdoor sculptures in The Woodlands,” said Robert Heineman, Vice President of Planning for The Howard Hughes Corporation. “Set within Creekside Park Village Green, this sculpture presents a dynamic counterpart to the interactive water feature in the village green and a visual enhancement to surrounding retail, walkways and seating areas. It is our goal to install a unique, active work of art to intrigue visitors to the center and residents of The Woodlands.”

Ibis, designed by de Movellan, features three red leaf-shaped elements constructed of light-weight enameled aluminum, each attached to one base in a way that allows them to rotate freely in response to surrounding airflow in the park.

The Howard Hughes Corporation owns, manages and develops commercial, residential and mixed-use real estate throughout the U.S. Its award-winning assets include the country’s preeminent portfolio of master planned cities and communities, as well as operating properties and development opportunities including: the Seaport District in New York; Columbia, Maryland; The Woodlands®, The Woodlands Hills, and Bridgeland® in the Greater Houston, Texas area; Summerlin®, Las Vegas; and Ward Village® in Honolulu, Hawaiʻi. The Howard Hughes Corporation’s portfolio is strategically positioned to meet and accelerate development based on market demand, resulting in one of the strongest real estate platforms in the country. Dedicated to innovative placemaking, the company is recognized for its ongoing commitment to design excellence and to the cultural life of its communities. The Howard Hughes Corporation is traded on the New York Stock Exchange as HHC. For additional information visit www.howardhughes.com.