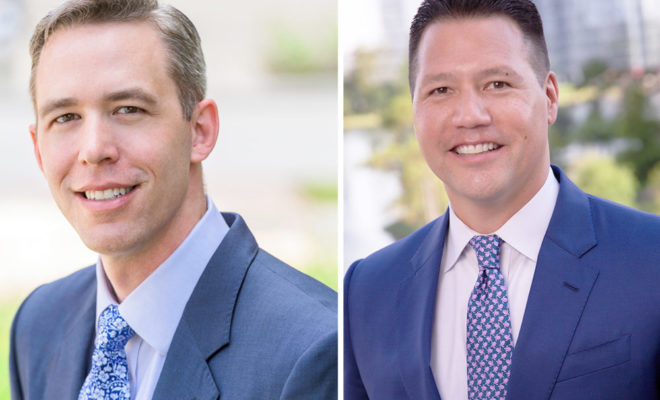 THE WOODLANDS, TX – The Howard Hughes Corporation recently announced that Jim Carman and Heath Melton have been promoted to continue leading the regional executive team for its master planned communities in the Greater Houston region: The Woodlands, Bridgeland and The Woodlands Hills. Jim Carman was promoted to Senior Vice President, Commercial Development, while Heath Melton was promoted to Senior Vice President, Master Planned Communities (MPC), Residential.

“It is a pleasure to announce the advancements for Jim Carman and Heath Melton at Howard Hughes. They offer the most professional level of expertise in completing extraordinary developments within our master planned communities’ portfolio,” said Paul Layne, President, Central Region for The Howard Hughes Corporation. “With the high level of residential and commercial activity in our award-winning communities, their vast knowledge of the industry is an asset to Howard Hughes.”

Jim Carman joined the company in August 2012. Carman has led his team in the phases of development for the award-winning Hughes Landing, one of Houston’s premier mixed-use urban centers on Lake Woodlands, along with other projects. As Senior Vice President, Commercial Development, Carman oversees development of all commercial projects located within The Woodlands and Bridgeland.

Prior to joining The Howard Hughes Corporation, Carman gained diverse expertise on commercial development projects located in Las Vegas, Nevada; Miami, Florida; and Grand Cayman, Cayman Islands. He received his Bachelor of Science in Civil Engineering as well as a Master of Engineering in Construction Engineering from Texas A&M University. Carman is a Board Member of Leadership Montgomery County and serves on the Executive Committee for the Leukemia and Lymphoma Society.

Before joining Howard Hughes, Melton was Director, Land Development for Taylor Morrison in their Austin Division. He also held the position of General Manager role for Travisso, a joint venture with Toll Brothers, to develop a 2,100-acre, 3,000 lot master planned community. Melton has a Bachelor of Science degree in Business Management/Systems Engineering from the United States Military Academy at West Point. Melton is an active member of the Urban Land Institute, serving on various committees.

Most recently, Carman and Melton served as the co-chairs for the 2018 Montgomery County Light the Night Walk benefiting the Leukemia & Lymphoma Society (LLS). As co-chairs and fundraising Executive Challengers, Jim Carman raised $107,000 and Heath Melton raised $114,000 for the walk. Carman and Melton both ranked in the top ten of the 1,875 Executive Challengers nationwide, landing number six and number four respectively.

Bridgeland is an 11,400-acre master planned community located in Cypress, Texas, consistently ranked one of the top-selling master planned communities in Texas throughout its 12-year history. The award-winning development offers a wide variety of housing options and extensive outdoor amenities, with a strong emphasis on conserving and enhancing the natural environment. Bridgeland has over 3,000 acres dedicated to lakes, trails and parks, and offers a resort-style pool, disc-golf course, stocked lakes and complimentary use of kayaks, paddle boats and other recreational equipment for residents. Lakeland Village Center, now open, is the first of four retail centers in Bridgeland, with additional plans for a future Town Center along Grand Parkway/Highway 99, which intersects the community. Bridgeland is a development of The Howard Hughes Corporation managed by The Woodlands Development Company.

The Howard Hughes Corporation owns, manages and develops commercial, residential and mixed-use real estate throughout the U.S. Its award-winning assets include the country’s preeminent portfolio of master planned communities, as well as operating properties and development opportunities including: the Seaport District in New York; Columbia, Maryland; The Woodlands, The Woodlands Hills, and Bridgeland in the Greater Houston, Texas area; Summerlin, Las Vegas; and Ward Village in Honolulu, Hawaii. The Howard Hughes Corporation’s portfolio is strategically positioned to meet and accelerate development based on market demand, resulting in one of the strongest real estate platforms in the country. Dedicated to innovative placemaking, the company is recognized for its ongoing commitment to design excellence and to the cultural life of its communities.