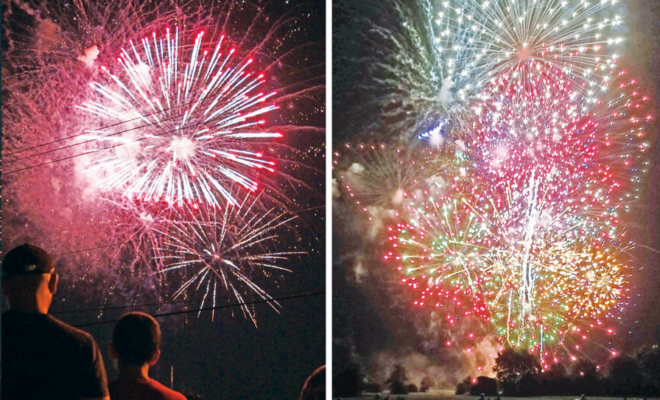 UPDATE 7/2/22: City of Tomball announced the cancelation of the July 4th fireworks show in the light of Tomball’s current drought conditions. The City’s Street Fest is proceeding as scheduled on Monday, July 4 with gates opening at 6 p.m. Read more here

TOMBALL, TX – It’ll be a flag-waving birthday celebration in Tomball on July 4 as the City stages the biggest Independence Day event in northwest Harris County.

Business Highway 249 north of FM 2920 behind Kroger will shut down for the annual celebration as the street fills with live music, food vendors, kids zone and a giant aerial fireworks display beginning at 9:30 p.m.

A special tribute to veterans and active duty military will be held with a sing-along of traditional patriotic tunes honoring the USA led by local entertainer Valerie Hill.

There will be all-American foods from Pecos Grilling Company and The Original Rib Tickler, and street vendors with a full menu of festival treats and cool beverages to choose from.

Gates open at 6 p.m. Parking and admission are free. Come early and bring your lawn chairs to snag the best spot for viewing the fireworks being launched from across Highway 249/Tomball Tollway near the festival site.

Coolers are allowed, but no alcohol or glass containers may be brought into the festival area. Tomball Fire Department is monitoring the drought conditions closely and will keep the public updated regarding the status of the fireworks show.

The Tomball July 4th Celebration and Street Festival presented by Keystone Home Pros is on Business 249 just north of FM 2920. The event’s hotel partner is Holiday Inn Express – Tomball. Tomball is 28 miles northwest of downtown Houston. For more information, visit “Tomball Is Texan for Fun” on Facebook or www.tomballtx.gov.