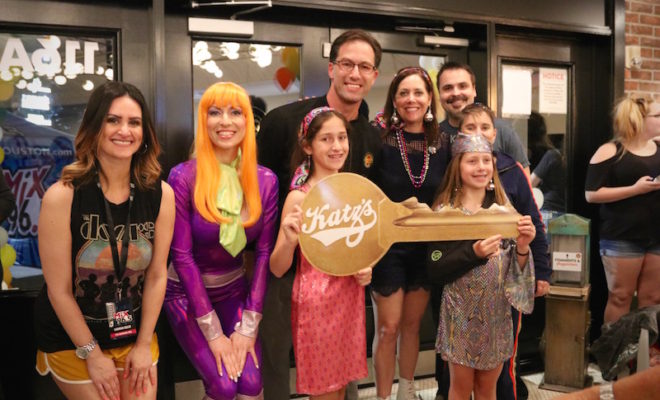 Katz’s Express, located in the Portofino Center in The Woodlands, officially re-opened as Katz’s Deli and Bar with 24-hour service on Friday, May 12, 2017 at 9 p.m. Just like its’ sister restaurant on Westheimer, the restaurant will feature the full Katz’s menu, waiter service, specialized dinner menu items, and the popular breakfast will be served 24 hours a day.

After cutting off the restaurant’s locks Barry Katz, the owner of Katz’s Deli and Bar, exclaimed “Katz’s Never Kloses!” The Grand Opening party was held from 6 to 10 p.m. on Friday and featured 1979 prices for lunch and dinner, a New York trivia contest, a 1979 costume contest, and more fun prizes for guests. Special appearances were made by the Mix 96.5 morning crew and “Disco Daphne” also known as Jenny Kelley from Hello Woodlands.

The remodeled Katz’s Deli in The Woodlands now brings a modern, stylish, Brooklyn-inspired neighborhood feel while retaining the bustling, authentic deli experience that makes Katz’s Deli a Houston favorite. The new design and concept complete with a side bar is geared toward bringing a taste of Brooklyn with a Texas twist to The Woodlands as it continues to grow and attract young professionals and families.

The new menu will include the Houston location’s offerings plus unique items like Texas Pecan Hummus with Whipped Feta Dip served with Bagel Chips, chicken and waffles, New York oversized sandwiches, and their famous cheesecake milk shake. Even the menus are now the size of a New York tabloid! Katz’s will also offer a wide range of local, domestic and seasonal beers on tap including Brooklyn Lager and a new wine list.

In the future, Katz’s is planning to expand from four to six more locations in the Houston area.

To learn more about Katz’s Deli and their menu visit www.ilovekatzs.com

View photos and videos from the Grand Opening event on the Hello Woodlands Facebook page!