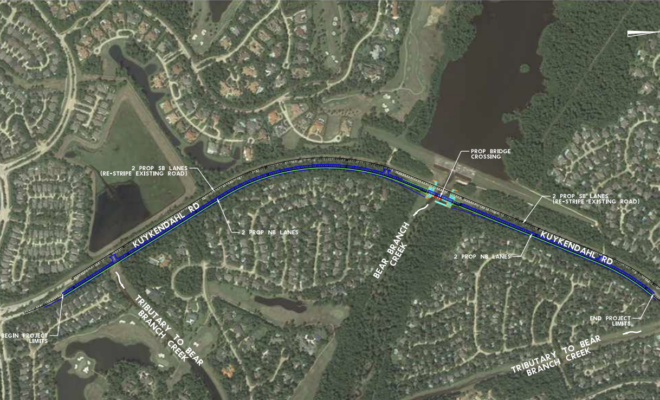 The paving is scheduled to occur between 1 a.m. and 9 a.m. daily to take advantage of the cooler overnight temperatures needed for the concrete. There will be heavy equipment and lighting on the job; and residents in the area should expect some noise from the construction work.

The slip-form paving is scheduled to take six days to complete and could extend into Monday or Tuesday the week of Aug. 9, depending on the weather. The goal is to finish this part of the paving prior to the start of school Aug. 11. This will complete a majority of the concrete road for the job, leaving the bridge deck, approaches on both sides of the bridge and the transition areas.

In addition to the concrete work, the 24 beams for the bridge over Bear Branch are scheduled for delivery and placement starting at 9 a.m. Monday, Aug. 2.

If possible, motorists should take alternate routes and avoid using Kuykendahl Road along the construction zone during the beam placement, which is expected to be completed sometime Monday afternoon/early evening.

The project, funded through the 2015 road bond approved by voters, will widen Kuykendahl Road to a four-lane boulevard from Lake Woodlands Drive to Research Forest Drive. Design includes construction of two 12-foot-wide northbound vehicle lanes with an 8-foot-wide outside shoulder; new bridge over Bear Branch for the northbound lanes that has a shoulder and walkway, mirroring the existing bridge. The two existing lanes will become the southbound lanes once construction is completed.