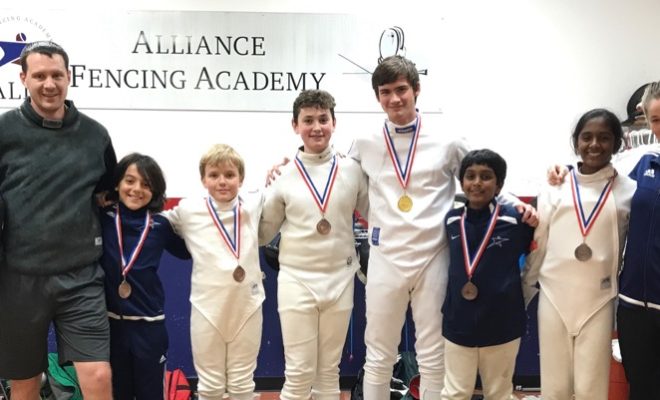 The most recent Regional event was held in Houston, Texas.  Three hundred ninety-one fencers ranging in age from 8 to 16 from across Texas competed at The Space City Regional Youth Circuit. Alliance Fencing Academy brought 79 fencers to the event.  Of the 8 Gold medals awarded in epee, Alliance Fencers won 7.  Alliance fencers from both the Houston and Woodlands locations brought home a total of 38 medals from the event.  Medals are awarded for places 1-8.  The Woodlands Alliance medalists included:

Fencing in a United States Fencing Association (USFA)-sanctioned event give fencers an opportunity to qualify to compete in the Junior Olympics and Summer Nationals events as well as earn fencing ratings.   The United States is divided into 6 regions for Regional fencing Competitions. Texas fencers compete in Region 5, which includes four states.

In each event, fencers compete in pools of 6-7 athletes. Athletes fence one another in 5-touch bouts. Based on their performance in pools, fencers advance to lengthier Direct Elimination bouts to ultimately determine the winner of the competition.

Alliance Fencing Academy was founded in 2004 by United States Olympic Coach, Andrey Geva. Geva led Team USA’s Women’s Epee Team in the 2016 Olympics in Rio. Alliance Fencing Academy is the largest epee fencing club in the United States with over 350 students at its two locations in Houston and The Woodlands.   It is also a top producer of collegiate fencers, with many students receiving athletic and academic scholarships to universities such as Columbia, U. Penn, Penn State, Notre Dame, Northwestern and Stanford.

For more information on classes or camps, visit Alliance Fencing Academy’s website at www.Alliance-Fencing-Academy.com or drop by to watch the fencers in action. Classes start as young as 5.  Alliance Fencing also offers Homeschool and evening classes, birthday parties and Off Campus PE Credit for multiple local school districts.