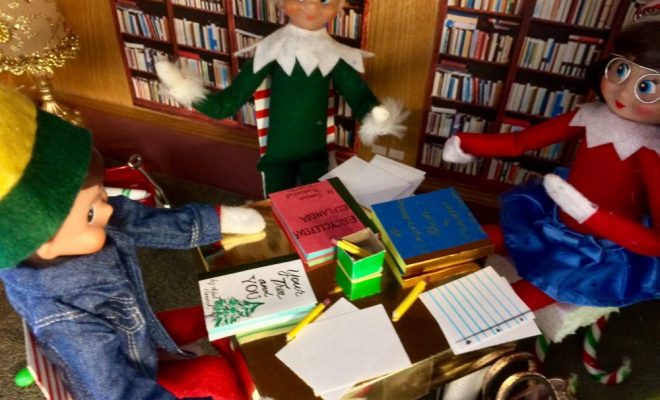 Many of us, especially those with young children, are familiar with the Elf on the Shelf. The Elf is a stuffed toy packaged with the Elf on the Shelf book designed to make children behave during Christmas. The book encourages children to name their Elf and then, as the title states, place the Elf on a shelf or somewhere visible in the house. The idea is that the Elf is watching the children at all times to ensure their behavior is good enough to get presents from Santa. The Elf flies to the North Pole at night to confer with Santa on any behavior issues, and returns the next morning in a different place in the house. The different placement and/or pose is “proof” that the Elf spoke with Santa.

The Elf is divisive among parents; some enjoy the creativity of finding new spots to place the Elf, while others despise the extra work at an especially busy time of the year, in addition to the idea behind it. Anita Tramonte was originally in the latter category. Explains Tramonte, “Initially, I resisted the Elf on the Shelf craze because it honestly freaked me out. It’s watching you all the time to see if you’re bad? That seemed both weird and creepy.”

Tramonte, a mother of five in who lives in Cochran’s Crossing in The Woodlands, first started her Elf creations in 2012 at the insistence of her children. “The kids were exposed to it at school and begged for one of their own. Basically, I caved. At first, one of my kids was freaked out by our Elf (Lollipop). After a few days of silliness, however, she accepted that he was fun and not ‘always watching,'” recalled Tramonte. When she saw that her children were enjoying the experience, she made it a mission to create epic scenes with her elves and have fun doing it.

Even before the Elf became a staple in the household, the Tramonte family was creative in other ways, so it only made sense that the Elf would eventually become a part of the family. “We’ve always made our own little stories about an imaginary mouse in our house and what our pets do when we’re gone (joyride the neighborhood in the Barbie Powerwheels with a stop at Starbucks, for example). It was kind of a natural progression to crazy Elf antics.”

Tramonte initially started her Elf scenes by looking at other ideas, then her creativity took over. “When we first started this madness, I just randomly trolled Pinterest. I shamelessly culled other people’s ideas and made them my own with random ‘me’ touches.”

Each year she got a little more into it and involuntary ideas for interesting and engaging Elf scenes would come to her. “I would be thinking about the kids and their lives and interests while driving my minivan loop around The Woodlands and then Bam! Elf idea!” said Tramonte. She made sure the Elves shared the same interests as her children.

As time went on, one Elf led to another. According to her kids, who by now were fully on board, there simply could not be one lonely Elf once the fun started. “After a few years with one Elf, and a lot of pressure from the kids, we got another Elf (Peppermint). This actually works really well because the Elves can interact in scenes. And then, last year I disemboweled an extra Elf that a friend donated because it was irreparably messed up,” revealed Tramonte.

Her sewing skills came in handy to repair the doll. She carefully took it apart and recreated it with green felt, and then it was time for a name and a story. “He’s a South Pole Elf named Bing, and he doesn’t speak English.” The new addition to the Elf family entered the household to serve as a symbol of inclusion. “I worked in the concept of kindness and understanding of others who are different than you in the scenes last year without getting too preachy, and the kids responded well,” she added.

Tramonte shares some of her favorite scenes from previous years:

Making scenes with curious little ones around the house creates an added level of difficulty at times. There have been some memorable Elf disasters. When one of the Elf scenes was set up too low, her toddler was able to reach the Elves and throw them around. But Tramonte came up with a quick fix for the situation. “The solution is kitchen tongs,” she revealed. “Any time you need to move an Elf, use kitchen tongs. Also, I fabricated a story about babies not being able to remove the magic because they don’t understand. Babies are also born with a protective coating that wears off when they’re older. This sounds ridiculous, but it worked.”

“Another time, Grandma didn’t understand the game and touched an Elf – Gasp! There was a major to-do about this. Grandma was forced to write an apology and promise not to do it again,” recalled Tramonte. In the end, the Elf forgave her.

Creating scenes takes time and energy that Tramonte does not always have, so she creates flexibility to plan around her hectic life and schedule. Although she doesn’t consider herself a planner, she writes all of her ideas down at the beginning of the season, and then moves them around to different days based on how tired or inspired she is each day. “Ironically, I’m NOT a good planner. With all the Elf shenanigans you would think that I had this down to a science. Oddly, it’s my creative ‘fly by the seat of your pants’ personality that makes it fun,” explained Tramonte. Some of scenes require props, costumes, back drops, and take a few days of planning. Depending how she feels, she may stay up all night to finish a project. “Some nights I’m just exhausted. I have five kids and they all have some sort of ‘crisis’ at any given time. So sometimes the Elves do a low-key minimal prep scene.”

She keeps an Elf journal with all of her ideas and a calendar of each past year’s activities. To ensure she does not repeat any ideas and to relive the memories, Tramonte decided to photograph and catalog her Elf scenes. “Kids are a tough, demanding audience and there is NO way they would accept a repeat of a previous year,” points out Tramonte. She creates a Shutterfly book with pictures of each day’s Elf scenes each year. She then orders and prints one out for the kids to remember the fun each year. The kids get to read and revisit the Elf Book for two weeks, and then it’s packed away for next year. “We have 5 years of Elf Books and the kids get really excited when it’s time to bring them out again.”

In addition to her personal collection, Tramonte puts her Elf scenes on the internet. “I also started out sharing the Elf antics sporadically on my Facebook page. I didn’t want to inundate my friends with Elf stuff when there are a lot of people out there who viscerally HATE them. I get it. I even warn friends to unfollow me for the month of December,” joked Tramonte.

She noticed that if she missed a day’s post about the Elves, one of her friends would ask what was going on. So she created a Facebook page specifically for her Elf scenes. “Last year I created the ‘Escape from the Vacuum‘ Facebook page about our Elves. It seems silly to me, but if people are curious about our craziness, there you go!”

In addition to the literal interpretation of Elves trying to escape a vacuum, Tramonte explains another meaning behind the name. “The Escape from the Vacuum name comes from a quote by George Borrow: ‘…mischief itself is merely an attempt to escape from the dreary vacuum of idleness.’ While I’m not normally idle, I consider the mom experience to have a lot of ordinary moments – potty training, homework time, and be-a-good-person training. The Elf scenes give me the opportunity to be creative and interact with my kids at the same time with a little bit of mischief mixed in.”