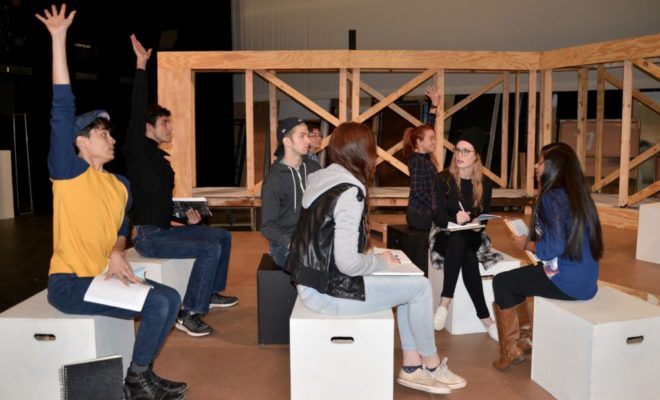 CONROE  – We all wish we could fly, but Lone Star College-Montgomery Drama Department examines what might happen if we actually could during its fall play “The Rise and Rise of Daniel Rocket.” There will be a preview Wednesday, November 15 at 5:30 p.m. and the show runs Thursday, November 16 through Sunday, November 19 at 7 p.m. with a special matinee performance Sunday at 3 p.m.

The coming of age drama opens with its characters in middle school. The main character, Daniel, is struggling with the geek label and the surprising ability to fly which he first keeps secret.

“Daniel Rocket is different from other kids,” said Matthew Young, LSC-Montgomery student and actor who plays the title character. “He is quirky, he is an outsider, a feeling everyone has felt to some degree, but one of the things that separates Daniel is his persistence in getting what he wants. He thinks anything is possible. He finds out he can fly and the play really gets going after everyone else finds out.”

The second act takes place 20 years later. Daniel has become a celebrity, but when he returns home, he realizes fame has not solved all his problems.

“These characters are very real people with real problems, but they exist in a world of caricature, a world where flying is possible,” said Shane Reynolds, LSC-Montgomery student and actor who plays Richard. “It is a very interesting to watch these normal characters react to the problems caused by the fantasy world they live in.”

The actors are ageless, tasked with a large energy shift as they portray the characters at 12 years old and 32 years old.

“Whenever we are in act one we make all of our voices sound younger,” said McKenna Hartlein, LSC-Montgomery student and actor who plays Judy. “Whenever we switch over to act two we are more mature sounding. The voice shift is something we have learned to control.”

“We can play up being a kid by having more energy and using fidgety body language,” said Madison Mapes, LSC-Montgomery student and actor who plays Alice. “Children squirm more, so we do not stop moving, but in contrast when we play the older characters we stand our ground and play up the physicality difference.”

Though the play sounds like a children’s fairytale, it is much more complex and packs much more heart.

“On a personal level, the play speaks to young adults, people who are growing up,” says LSC-Montgomery student and actor Travis Cook who plays Steven. “A lot of this play is about how people see things when they are kids and later when they have grown up.”

Daniel takes to the to skies several times, an effect skillfully achieved with ingenious staging on the set.

“My alma mater, Centenary College did this play last year and just the title of it really interested me and I knew I wanted to bring it to this audience,” said LSC-Montgomery professor and show director Chase Waites. “Without giving anything away, it is going to be interesting to see how people react to the end of the play: is it a happy ending? Is it a sad ending? Did change finally come for Daniel Rocket?”

“The Rise and Rise of Daniel Rocket” appropriate for all ages. Tickets can be purchased online at lonestar.edu/theatre-montgomery or at the box office on the day of the performance. Tickets are $10 general admission, $7 for seniors (55+) and $5 for students/faculty/staff. Expected running time is two hours including one 10-minute intermission.