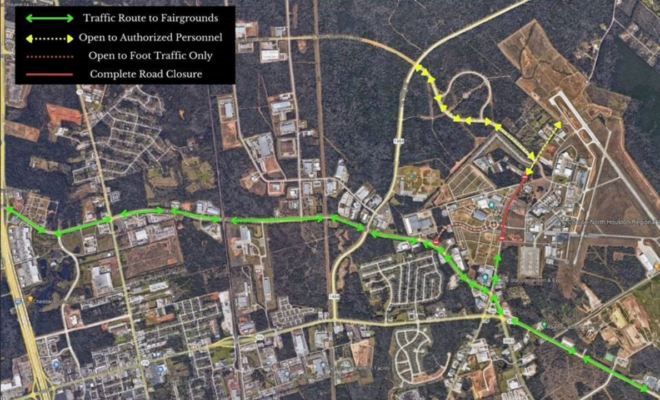 On Saturday, January 29, 2022, the 45th President of the United States, Donald J. Trump, will be joined by endorsed candidates, members of the Texas Congressional Delegation, and other special guests in Conroe, TX. This event will be held at the Montgomery County Fairgrounds located at 9333 Airport Road. This event will bring large crowds and cause major traffic delays throughout the city. Heavy traffic congestion is expected from very early hours until late at night. FM 3083 will be the only entrance to the Fairgrounds and FM 3083 should be avoided if you are not attending the event. There will be several other road closures in the area of the fairgrounds where Police and event volunteers will be directing traffic to and from this event. More details will be on social media when they are available.

On Friday, January 28, the Montgomery County Sheriff’s Office shared the following press release regarding Traffic and Parking Information for Save America Rally:

After the event, you may exit north or south onto Airport Road. Please follow our social media platforms for updates regarding this event.

All questions regarding this event should be directed to 936-756-1010. Remember 911 should only be used in the event of a life threatening emergency.