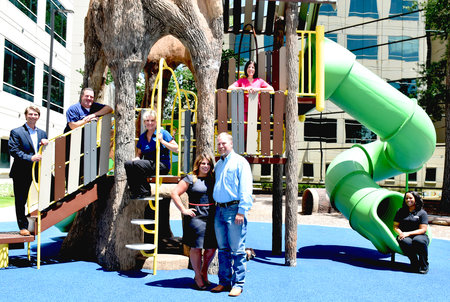 John and Paige Wolf’s first child, Jack, was born prematurely on May 5, 2005, with a lethal form of osteogenesis imperfecta (OI). The Wolf family selected Memorial Hermann The Woodlands for their care based upon its experienced, compassionate neonatal intensive care unit (NICU) team. John and Paige were able to bring Jack home under hospice care, but Jack lost his battle with OI and passed away at just 5 weeks old.

“Wolf Park is open to pediatric patients and other children, but it’s also a place for NICU parents to take a break and for staff and visitors to enjoy as well,” shared director of Children’s Services Elizabeth Kutchback, RN. “The Wolfs are considered family to us at Memorial Hermann The Woodlands. This latest donation is a reminder of their passion for helping other NICU families.”

Since the golf tournament’s inception, more than $130,000 has been raised for Memorial Hermann The Woodlands.