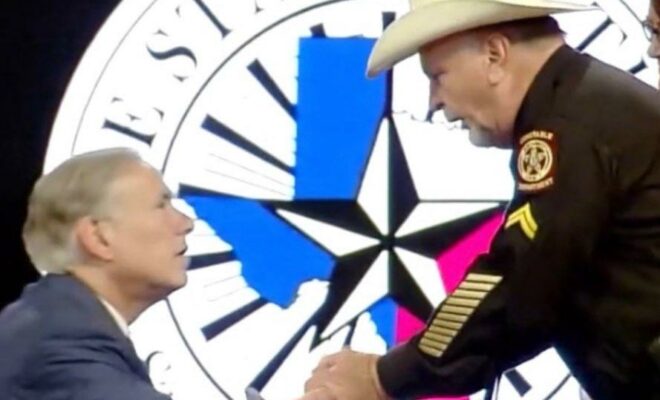 AUSTIN, TX – Recently in Austin, the Star of Texas Award was presented to peace officers, firefighters and first responders who demonstrate heroism and sacrifice while on duty. 46 Texans recently received this recognition at the 2021 Star of Texas Awards.

One of the only recipients from Montgomery County was Corporal Lonnie Bruce Harrison who was seriously injured while on duty. His patrol vehicle was involved in a vehicular accident. The collision damaged Corporal Harrison’s spine and as a result, his ability to perform his duties has been impacted.

The Star of Texas Award was created to recognize individuals who demonstrated remarkable courage and tremendous sacrifice in the line of duty.

“Corporal Harrison made a decision to become a peace officer in order to make a positive difference in this world. He chose Montgomery County as the place where he could like to work and offer his services. The unfortunate accident reduced his ability to serve his aspiration to help others. The Star of Texas Award lifts the individual up to be recognized for the risks that are taken each day by men and women, like Corporal Harrison, during their line of duty,” states Montgomery County Precinct 2 Commissioner Charlie Riley.

Corporal Harrison, along with the 45 other recipients were honored for their self-sacrifice in keeping Texas safe in a ceremony where Governor Greg Abbott and his wife, Texas First Lady Cecilia Abbott presented the Star of Texas Awards to each deserving person.