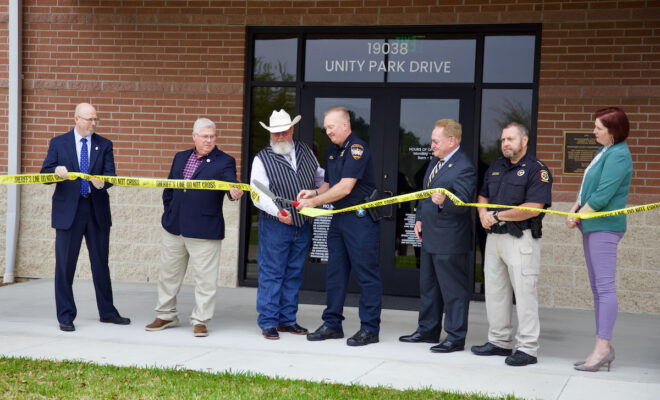 View photos from the grand opening on the Hello Woodlands Facebook page:

Watch the video of the grand opening on the Hello Woodlands YouTube channel:

We have been eagerly awaiting this opening as it will provide an innovative and expanded workspace not only for our Patrol Deputies but will also be home to our District 4 Command Staff and Detectives. This 16,760 square foot facility also includes a new satellite jail that will allow Deputies to process arrests and complete their calls in a timelier manner, versus fighting traffic to travel to the central jail in Conroe.

The West Patrol area of the county has experienced exponential growth over the years, and part of the foresight of the Sheriff’s Office campus master plan was to have this new building and satellite jail to more efficiently serve the community and the law enforcement agencies in the area.

It is with great pleasure we get to report this project was secured and completed without any additional expense to the taxpayers; in fact, the project was completed under budget, partly attributable to Sheriff Henderson’s fiscally conservative, zero-budget philosophy. This new facility was a collaborative effort between the Sheriff’s Office and the Montgomery County Commissioners Court.