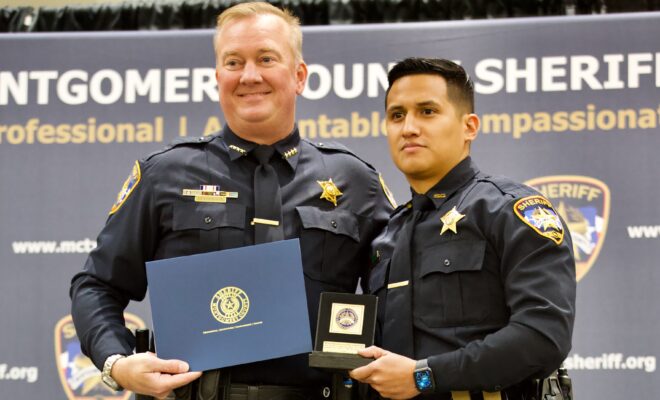 On October 29, the Montgomery County Sheriff’s Office celebrated promotions and accomplishments at its bi-annual awards ceremony held at the Lone Star Convention Center in Conroe, Texas. Sheriff Rand Henderson recognized 20 well-deserved promotions, which took place between June 2020 and the date of the ceremony. The Sheriff’s Office also recognized personnel for various commendations earned since June 2020.

View photos from the ceremony on the Hello Woodlands Facebook Page and the video below on YouTube:

A Community Action Partner Award was presented to FM 1488 Animal Medical Center and their employees for the numerous donations and treatments for our canine Deputies.

The commendations included eight P.A.C.T. Awards, which recognize employees for their commitment to the Sheriff’s Office core values of being Professional, Accountable, Compassionate and Trusted, and four unit citations. The unit citation award is awarded to those units who have distinguished themselves by an outstanding achievement, act or service outside the normal scope of their duties. Three additional employees were awarded Life Saving Awards for their quick and decisive actions to save the lives of Montgomery County citizens. The ceremony concluded with four Combat Cross medals that were awarded to Deputies who acted to protect others from an imminent threat of bodily harm or death while in the line of duty.