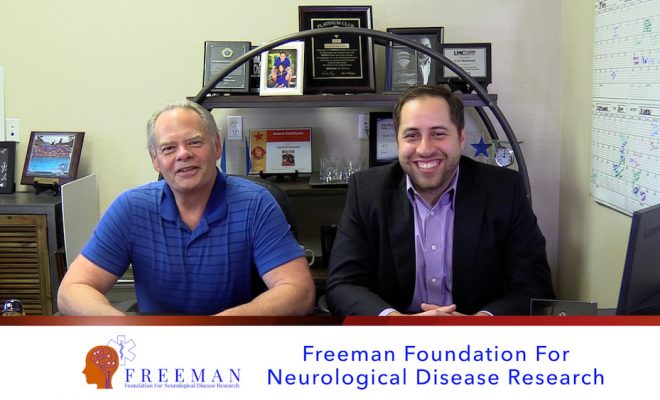 Nonprofit of the Month: Freeman Foundation For Neurological Disease Research

Randy Lovelace of Paragon Independent Insurance Agencies introduces the Hello Woodlands Nonprofit of the Month, Freeman Foundation For Neurological Disease Research (FFNDR), and talks with Zach Richmond of The Richmond Realty RE/MAX The Woodlands & Spring and FFNDR board member.

Watch our video interview below!

Freeman Foundation For Neurological Disease Research (FFNDR) Founder Tim Freeman grew up in Junction, Texas where he graduated high school in 1982. From there, Tim attended The University of Texas at Austin and was a walk-on football player for the Longhorns for 2.5 years. Tim has been selling medical devices for 27 years. During his time with Medtronic, they came out with their first generation Deep Brain Stimulation (DBS) device. As the Image-Guided Surgery Specialist, Freeman was involved in some of the first DBS implants in Houston. This was only the beginning of Tim’s path with Parkinson’s. Just two short years later, Tim’s mother, Beth Freeman, would be diagnosed with Parkinson’s Disease. In 2007, Mrs. Freeman would lose her battle with Parkinson’s at the age of 71. Just five years later, at the age of 49, after competing in a 100-mile bicycle race in New York, Tim was back in Junction for graduation ceremonies where he was awarding scholarships. During the presentations, he noticed a tremor in his right hand, but not in his left hand. He knew at that point that he had a serious problem and immediately went to a neurologist in Houston. In June 2013, Tim was diagnosed with Parkinson’s Disease.

Tim Freeman shared, “My immediate reaction was that it’s impossible, PD is an old person disease, and at this time I was in prime physical condition. I was uncertain how long I had to live, etc., and from the 45 minutes I had to drive from The Medical Center to The Woodlands, I had my pity party. When I got home, I wrote a letter to friends and family about the news. In conclusion, I told everyone not to be worried because PD had picked the wrong person to mess with and that we will defeat it!”

Learn more about the Freeman Foundation For Neurological Disease Research by visiting their website at https://www.ffndr.org/

Up to a billion people worldwide are living with a neurological brain disorder for which there is no cure. The Freeman Foundation For Neurological Brain Disease’s mission is simple: To Accelerate Breakthrough Research That Results In A Cure For Neurological Brain Diseases. FFNDR uses their resources to support high-quality, innovative brain research through organizations such as The Michael J. Fox Foundation and the Texas Children’s Hospital Neurologic Research Institute.

Make a donation, get involved, and learn more about the Freeman Foundation For Neurological Disease Research by visiting their website at https://www.ffndr.org/

To learn more about Randy Lovelace, his “Referral for a Cause” program to help local nonprofit organizations, and of Paragon Independent Insurance Agencies, please call (281) 298-0440, email rlovelace@paragoninsagencies.com or visit www.paragoninsagencies.com/woodlands.