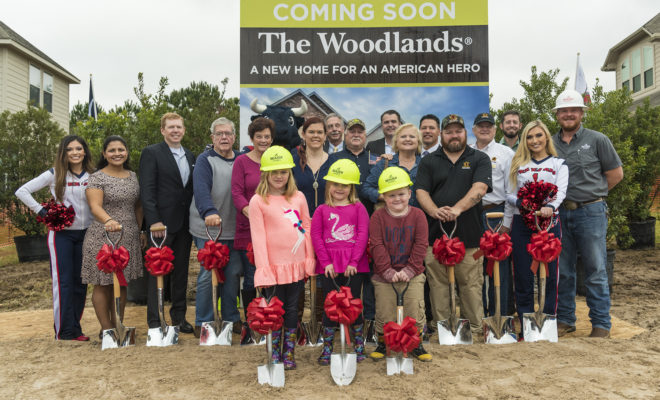 THE WOODLANDS, Texas – Just in time for the holidays, the Kadleck family broke ground on their new home on Tuesday, December 19. Operation FINALLY HOME, Beazer Homes, The Howard Hughes Corporation, the Houston Texans, and The Woodlands community joined U.S. Army Sgt. John Kadleck, his wife, Erin, and their children, to celebrate a groundbreaking ceremony at the site of the family’s future custom-built, mortgage-free home.

The family was surprised with the news that they were receiving a new home at the Houston Texans game on December 10. The family was on the field during the first quarter to play video board game “Texans Press Your Luck,” and on the final spin, the mystery prize was revealed to be their new home!

U.S. Army Sgt. Kadleck is a 20-year veteran of the United States Military. He began in the Marine Corps, followed by serving in the Army National Guard and the Army Reserves. He spent eight years in active duty in the Army. During his time with the Army, Kadleck served three deployments. In his service, he received numerous commendations including the Combat Action Badge, Afghanistan Campaign Medal, Iraq Campaign Medal, Army Commendation Award and more. He and his wife are very involved with organizations that help veterans and their families.

Operation FINALLY HOME was established in 2005 as a nonpartisan/nonprofit 501(c)(3) organization with a mission to provide custom-built, mortgage-free homes to America’s military heroes and the widows of the fallen who have sacrificed so much to defend our freedom and values. Operation FINALLY HOME partners with corporate sponsors, builder associations, builders, developers, individual contributors, and volunteers to help America’s military heroes and their families transition to the home front by addressing one of their most pressing needs—a home to call their own. To find out more, visit OperationFinallyHome.org.

PHOTO: U.S.Army Sgt. John Kadleck, his wife Erin and his children Abby, Emma and Joshua in May Valley in The Woodlands’ Village of Sterling Ridge with Gordy Bunch, Chairman of The Woodlands Township Board of Directors, Pastor Joe Lanzillotti of WoodsEdge Community Church and Magnolia ISD’s Smith Elementary Principal Dion Rivera.