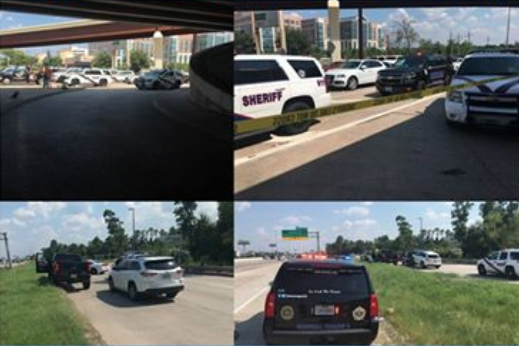 Road Rage turns into Stabbing and Shooting at 242 and I45

The Montgomery County Precinct 3 Constable’s Office reported that about 3pm on Saturday, July 28, 2018, the driver of a black Chevy pickup and white Toyota SUV were involved at a road rage incident that escalated into one being stabbed in the arm and the other shot at after a brief fight underneath the overpass of IH-45 and SH 242.”

The Montgomery County Sheriff’s Office shared that the “incident was a vehicle disturbance, which resulted in one vehicle striking another vehicle. When the drivers got out to check damage to the vehicles, one driver stabbed the other driver. The stabbed driver retrieved a firearm from his vehicle and fired several bullets into the suspect vehicle. Both vehicles and individuals are on location and deputies are investigating. The driver that was stabbed is being treated for his injuries and is expected to survive.”

Montgomery County District Attorney’s Office has accepted charges against Cody Dawson for Aggravated assault with a deadly weapon for stabbing Jason Choat. Jason Choat was charged with deadly conduct for firing in the direction of Cody and striking his truck after the altercation. Jason was treated for minor injuries and released.

Both subjects have been booked into the Montgomery County Sheriff’s office jail.

UPDATE: Captain Dan Zientek shared that “at approximately 3:25 PM a disturbance occurred after a traffic altercation between two vehicles traveling north on Interstate 45 feeder at SH 242 in the u-turn lane near the underpass. A 30- year-old male from The Woodlands area exited his vehicle because he had struck the car in front of him. A 45-year-old male from Lousiana exited the second vehicle and started to argue with the other driver verbally. The argument then turned physical and both drivers were exchanging blows that is when the 30-year-old Cody Dawson pulled a knife and stabbed Jason Choat in his arm, causing a minor injury. At this time the drivers separated, and Cody had retreated away from Jason. Jason returned to his car and obtained a handgun and started shooting in the direction of Cody striking his vehicle. Montgomery County District attorney’s office accepted charges against both males. Cody is charged with Aggravated assault with a deadly weapon for stabbing Jason. Jason is charged with deadly conduct for firing in the direction of Cody and striking his car after the altercation and threat had passed. Cody was treated for minor injuries and released. Both subjects are booked into Montgomery County Jail.”