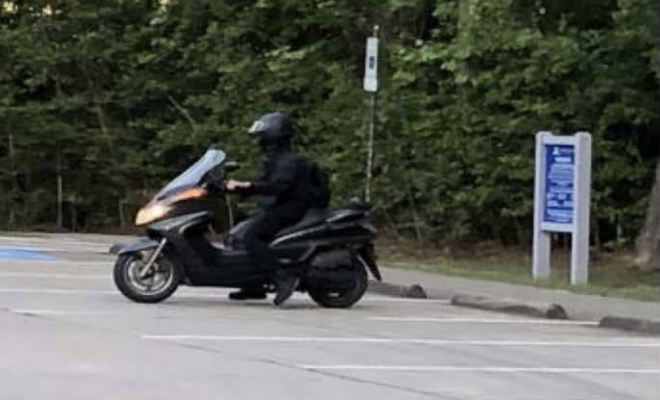 UPDATE: Sheriff searches for Suspect in May Valley Park Robbery

UPDATE 4/2: On April 2, 2020, at about 1:30 pm, Deputies with the Montgomery County Sheriff’s Office were dispatched to May Valley Park located at 11598 May Valley Drive in The Woodlands, Texas in reference to a black moped matching the description of the robbery suspect from yesterday. Citizens seeing the earlier issued press release contacted the Montgomery County Sheriff’s Office who dispatched Deputies to the park to investigate. As Deputies were enroute to the location they observed the moped and attempted to stop it to investigate further. A pursuit was initiated by Deputies in the area of 8000 Woodlands Parkway, The Woodlands after the driver refused to stop. During this pursuit, the operator of the moped drove recklessly and subsequently lost control and crashed in the 6700 block of Sterling Ridge, The Woodlands. Emergency Medical Services were immediately summoned to the scene and began rendering medical assistance. The driver was transported to a local hospital for treatment.
At this time, the Montgomery County Sheriff’s Office is still investigating the pursuit and the robbery.

ORIGINAL 4/2: On April 1, 2020, at about 6:50 PM, the Montgomery County Sheriff’s Office was dispatched to May Valley Park located at 11598 May Valley Drive in The Woodlands, Texas in reference to a robbery.

When Deputies arrived, they made contact with the two victims who stated a male wearing all black approached them and demanded their wallets and phones while pointing a black pistol at them. The victims said they dropped their property and ran for help. A witness who saw the incident took the above photograph as the suspect was fleeing the scene.