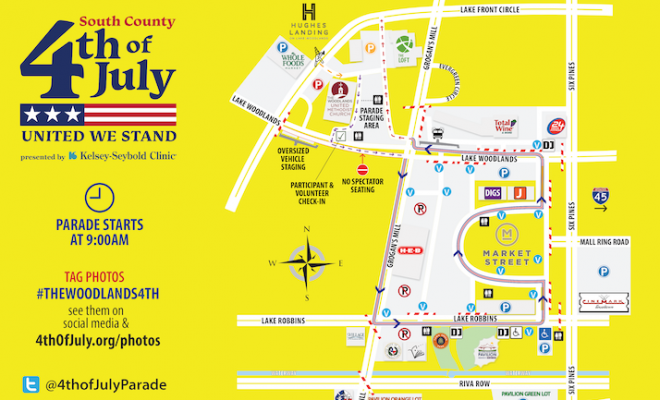 The Woodlands, TX – The 44th Annual 4th of July Parade, “United We Stand,” will begin at 9:00 a.m. with Lt. Fiona Sullivan singing the national anthem from the balcony in Market Street and Gideon Bustamante singing at Town Green Park. More than 20,000 spectators will line the streets in Town Center to celebrate.

An expected 150 entries will parade along the 1.3-mile route through The Woodlands Town Center, including four five marching bands and federal, state and local dignitaries, Color Guard, fire engines, horses, street performers (superheroes, balloonists, jugglers, stilt walkers, cowboys, and mimes) and the most military of any parade in the region.

In accordance with this year’s parade theme, “United We Stand,” the coveted Parade Grand Marshal position has been awarded to two Woodlands residents. Christine Clinkenbeard was named Community Grand Marshal for her efforts in helping Hurricane Harvey victims and Charles Abell, retired Lt. Commander of the US Navy, was named Military Grand Marshal.

“We are excited to have two Grand Marshals this year, which is a testament to the 2019 Theme, United We Stand,” said Kelly Dietrich, President of the South County 4th of July Committee.

Prior to the parade, street performers and The Woodlands Concert Band will entertain parade goers in Market Street.

“The committee is once again excited to have one of the largest military presence of any parade in the region,” said Anna Anklam, Vice President of Community and Military Dignitaries.

The parade is funded through community donation and would not occur without the support of The Woodlands Township. The parade is produced with help from 200 volunteers, including special guest announcers Nick Wolda, President of Visit The Woodlands, and Ramon Torres.

Announcer booths are also located in front of Town Green Park, The Cynthia Woods Mitchell Pavilion and 24-Hour Fitness. The parade will be live streamed from the three announcer locations. Community Judges score the entries to culminate in 12 Parade Entry Awards.

This year’s presenting sponsor is Kelsey-Seybold Clinic – The Woodlands, a local multi-specialty clinic serving The Woodlands and surrounding area and is known as the first nationally accredited Accountable Care Organization by the National Committee for Quality Assurance in our region. Kelsey-Seybold has 20 clinic locations, including The Woodlands Clinic and The Woodlands OB/GYN and Women’s Health, and more than 400 providers representing 50 medical specialties caring for patients in the Greater Houston area.

“The South County’s 4th of July Parade is a time for our community to come together each year to celebrate our heritage and this country that we all love. We are proud to serve as the presenting sponsor for the parade and look forward to seeing residents – and our patients – lining the streets on July 4th,” said Leonardo Espitia, M.D., M.M.M., managing physician of Kelsey-Seybold Clinic – The Woodlands.

The committee hosts an annual Marching Band Scholarship Program. This year four marching bands will be in the parade:

Attendees are encouraged to follow the parking plan for the Red, Hot and Blue Festival.

Market Street Stage (Above North Commons on the Balcony) sponsored by Trademark Properties:

For more information about the event and how to become a sponsor for this year’s parade, visit www.4thofjuly.org.

Lt. Fiona Sullivan is an Expeditionary Medical Facility nurse with the US Navy and is assigned to EMF Dallas One. Before serving in the Navy, she performed with the Houston Symphony for 10 years. As a civilian, she has spent the last 10 years working as a nurse at Memorial Hermann in The Woodlands. She is married to Todd Sullivan, a US Navy Veteran, and has two daughters, Shelby and Ashlyn.

Gideon Bustamante, or The Painter, is an alternative pop artist on the front lines of post digital culture, covering everything from classics like “Stand By Me” to new artist favorites like “Chandelier” and “XO.” He has become a North Houston/Woodlands area performing favorite with his haunting collection of original songs like “Mirror,” with its throbbing moody vibe chock full of lyrical motifs sure to stick to the ribs. His quietly wise voice can quickly build to impressive hair-raising levels.

The Woodlands Concert in Market Street

The Woodlands Concert Band is directed by Paul Worosello. (pronounced Wo (long o), cell (like cell phone), and loe (sounds like low). The Woodlands Concert Band has the honor of being invited to perform at the Texas Bandmasters Association, Texas Choral Directors Association, and Texas Orchestra Directors Association on July 25 in San Antonio, Texas. This is its 15th season as a band of 65 plus members. They rehearse at Christ Church United Methodist on Research Dr. next to The Woodlands High School, every Thursday night from 7:00 pm until 9:00 pm. All musicians are welcome to come and join the band – musicians who are just picking up their horns or sticks after a hiatus, as well as semi-professional and professional players who are after a relaxed atmosphere with fulfilling program choices.