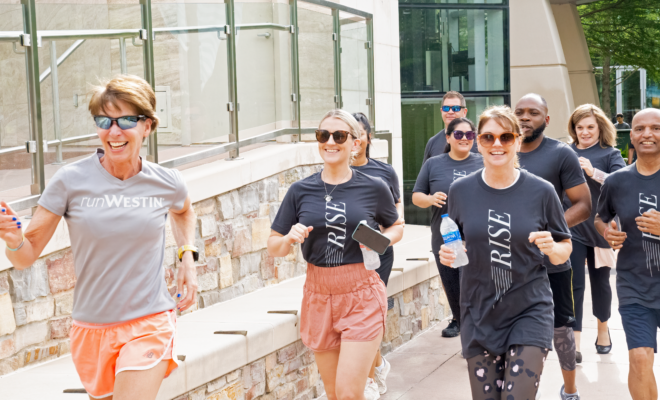 The Westin at The Woodlands Reinstates Run Concierge; Expands Program with Group Perks

THE WOODLANDS, TX – AAA Four Diamond The Westin at The Woodlands has reinstated Sandra Huskey to the role of Run Concierge. The program – sidelined just over two years by COVID – was recently reintroduced by popular demand in tandem with Global Running Day on June 1.

In its new incarnation, The Westin Well-Being offering will not only provide guided running tours free of charge to guests every Monday, Tuesday, Wednesday and Thursday morning at 6 am, but is also being expanded to create complimentary wellness-related Movement Breaks for in-house groups.

The guided runs, which begin with a short series of dynamic stretches and breathing exercises, vary from two to five miles and typically average three miles based on guest preference. Huskey frequently varies routes to keep things fresh for returning participants, as well as to accommodate special requests whenever possible. Options for the 10 to 30-minute group perks, which are aimed at increasing productivity, range from onsite stretching to walks that that double as an orientation of the area. They are available mid-morning or early afternoon – also every Monday through Thursday.

According to Huskey, who previously held the Run Concierge position at The Westin at The Woodlands for two years until March 2020, “I’m thrilled to be back at The Westin at The Woodlands, a property that sets itself apart in this market with a focus on wellness, something that is near and dear to me. The hotel’s location in this picturesque, pedestrian-oriented community makes my job a dream, given the number and variety of routes to choose from, all with a waterfront component.”

The longest runs take guests from the front door of the hotel in the heart of The Woodlands at Waterway Square to scenic Hughes Landing on Lake Woodlands.

For Huskey, who has been a runner for most of her life, the concierge title is perfectly apropos for the job. Not only does she introduce guests to The Woodlands by sharing points of interest along the way, but also dishes out advise to questions spanning from interesting attractions and restaurants with healthy food and beverage options to details on local running club offerings in The Woodlands, which annually hosts both The Woodlands Marathon – taking place in 2023 on March 4 – and Ironman Texas on April 22, 2023.

A part-time diabetes prevention specialist, Huskey also loves to talk about the health and social benefits of the sport. “I took up running seriously as an adult when my twins were babies,” she says. “I crave the endorphins, the camaraderie of a shared interest with other runners and competing against myself and others.”

Equally passionate about public art, she hopes to eventually create a community event that that brings her two great interests together by encouraging participants to interact with the many public pieces displayed throughout The Woodlands and learn more about them as they navigate the trails.