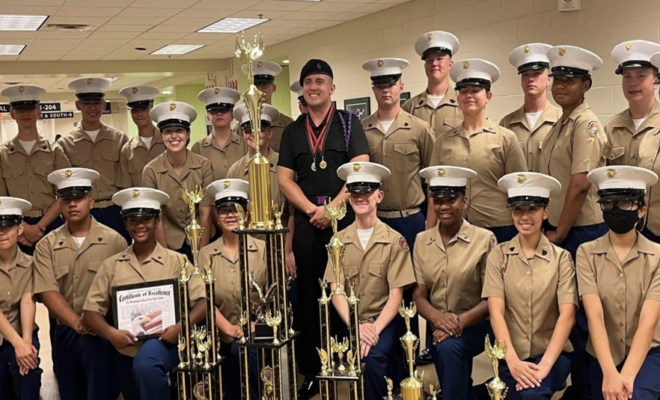 THE WOODLANDS, TX – In April, the The Woodlands College Park High School’s JROTC competed at the All Service Nationals in Daytona Beach, Florida, and, after a full year of practice, they managed to take home the National Title.

“Unlike our school, these teams have been competing in the All Service Nationals for years upon years, holding high level titles. They understood the patterns of the major competition and many had long been champions,” sophomore Cadet Isabel Martinez said.

This was the first and only competition the JROTC went to this year, they spent the year revamping their routine. In Daytona, they were placed into the Division I competition against other teams who had been there for years and even decades prior.

“Our cadets have been working hard all year to learn a new style of armed drill, specifically competed in Daytona,” Lt. Col. Maury said.

The team started to work with coaches in September to prepare for it, finally finishing in April. They had many coaches that volunteered their time and worked with them every day after school.

“The main goal of the championship was to solidify ourselves as a strong and professional team,” sophomore Reece Glass said.

The team, consisting of 25 cadets, two instructors, and additional coaches, competed against 1,500 cadets. Although the group didn’t compete in anything before Daytona, they previously showed off their skills at a Veterans Day parade and followed a consistent after-school practice regime.

Lieutenant Colonel Maury said, “We are blessed to have the amazing talents of our coaches, who donated their time because they believed in our cadets’ abilities. This entire process has proven to us that if you set the bar high, provide the necessary resources, commit yourself to the time and effort that is truly required, and create the environment where everyone involved believes it’s possible, you can achieve greatness.”