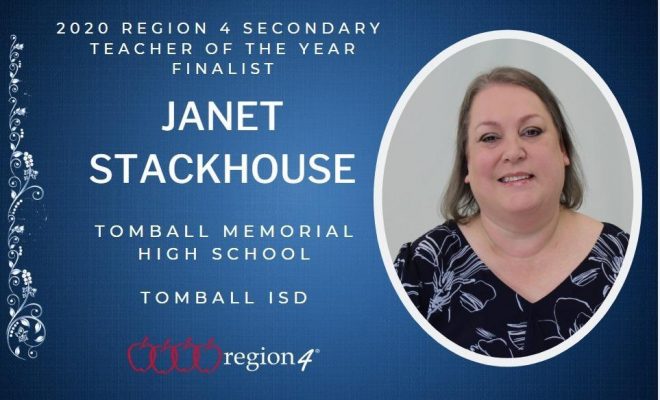 Founded in 1925, the TASA is the professional association for Texas school administrators, providing networking and professional learning opportunities, legislative advocacy, and targeted communications to support the work of superintendents and other school leaders.

Stackhouse was one of just five secondary teachers in all of Region 4 named a finalist and will be up for the 2020 Region 4 Teacher of the Year honor when it is announced in August.

She is one of five secondary teachers still remaining and up for the prestigious honor as Region 4 Teacher of the Year. She joins Joe Paneitz (Humble ISD), Caren Wonders (Pearland ISD), Angela Johnson (Goose Creek CISD) and Lorelei Thorp (Fort Bend ISD) as finalists.

Stackhouse is a veteran teacher that has spent her entire 26-year career with Tomball ISD. She began her time in Tomball ISD at Tomball High School in 1993 and was a part of the school for 18 years. She made the move to TMHS when it opened in 2011.

Stackhouse is proud to be a part of Tomball ISD. “The highest possible education of all students has always been and always will be the central focus of this district,” said Stackhouse. “Everyone is truly willing to do whatever it takes and it is evident every day.”

Since 1969, the Texas Teacher of the Year Program has honored excellence in classroom education and provided a forum to showcase many outstanding educators whose efforts and example have inspired their students, their colleagues, and the communities they serve.