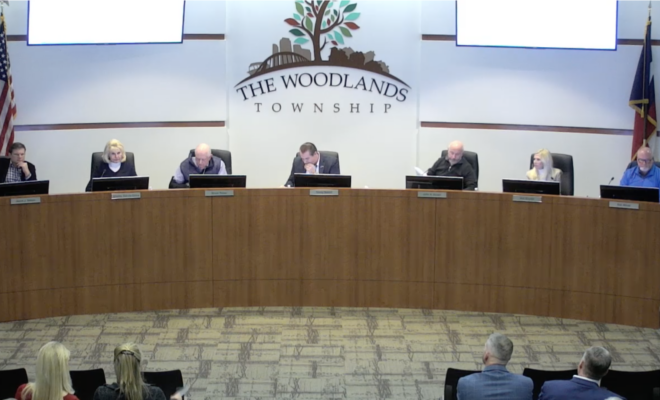 View the video, agenda, and presentation from the Special Board meeting on The Woodlands Township website at https://woodlandstx.new.swagit.com/videos/189735

During public comment section of the meeting, concerns from residents and recently elected Township Director Kyle Watson were presented. Comments included concerns regarding the rush, conflict of interest, and legal consequences of privately discussing and/or voting upon proposed amendments to the preliminary project plan and preliminary financing plan for the EDZ.

The Township Board then moved into a closed private meeting, recessing into an Executive Session for the EDZ.

After the Board reconvened in the public session, Monique Sharp, President/General Manager of The Woodlands Township, shared a presentation sharing a summary overview of the Project Plan and Preliminary Financing Plan of the EDZ.

Before beginning the presentation, Sharp stated that, “I want to stress that this is a potential economic development project in terms of how the mall developer is viewing it. So, for us, for The Township, in terms of the grant and the amendment to the EDZ, that is set tonight, but I just want to stress that this is the first step, only one step, in the entire process as far as the mall developer is concerned in bringing this project to fruition. This is just our piece, not the whole piece. So, I just wanted to stress that.”

In the presentation, Sharp shared that the purpose of the meeting held on the evening of November 17, was to:

As detailed in the presentation, the EDZ is a political subdivision of the State separate from The Woodlands Township, with a separate governing body appointed by The Township Board. The EDZ has the authority to assess a sales and use tax and utilize such tax to promote the initial development or substantial redevelopment of an area and further the public purpose of the promotion and stimulation of business, commercial, and economic activity in The Township and the State. The Township EDZ has the same boundaries as The Woodlands Township.

Current EDZ Projects funded by The Township include:

EDZ Projects that have been paid off include The Cynthia Woods Mitchell Pavilion expansion ($1.35 M, 20-year term, paid off in 2011).

Other economic development projects, other than those created by the EDZ, that have been funded by The Township include The Woodlands Waterway Marriott Convention Center and Parking Garage (issued $51.25 in bonds in 2001, to be paid off in 2028) and the Costco Sales Tax Rebate Agreement (estimated to be paid off in 2022).

Based on the 2023 Budget, The Township EDZ generates $66.6 million annually in Sales and Tax Revenue.

Sharp shared that representatives of The Woodlands Mall Associates contacted The Township Board Chairman Gordy Bunch and the President (herself, Monique Sharp) approximately six months ago to initiate discussion and present the concept. The Township Board has discussed the project in Executive Session on three separate occasions including concept renderings of the project, proposed terms, and financial projections.

Sharp stated that, “The reason it was done in Executive Session is that not only is The Township allowed to discuss those types of projects in Executive Session, but we are actually required to as to not to put the other parties, in this case The [Woodlands] Mall Associates, at a disadvantage in their negotiations with other parties to the agreement. As I mentioned, we are not the only party to this; there are many others involved. And so, we actually can get in trouble if we provide information in public that we are not allowed to that would then harm them in bringing their project to conclusion or negotiations.”

The new proposed EDZ project will be located south of Macy’s at The Woodlands Mall, currently the large parking lot (approximately 15 acres), and developed in two phases. The general description of the proposed project is an open-air, mixed-use commercial center containing not less than:

Revenue generated by the new project would be allocated as follows:

Multiple questions were presented and answered by Sharp during the presentation, including: If sales tax and hotel tax revenues generated by the new project are not sufficient to refund the mall developer for the actual cost of the parking facility, The Township will not be obligated to make up the difference.

Daniel Ringold, Partner of Schwartz, Page & Harding, was asked to speak on experience in counseling The Woodlands Township in creating four EDZ projects. Ringold shared, “What is proposed tonight is not the creation of a new EDZ, this is just an economic development agreement within the existing EDZ, for lack of a better term, a defined area which new revenues will be used to pay the obligations that are proposed in the economic development agreement.” Ringold also confirmed that The Township would not be taking on an obligation of debt with the project.

Speakers were invited to talk during the Public Hearing:

Before voting, Township Board Director Ann Snyder shared a comment stating, “I think it’s important that we pause and let the community know what this is. I don’t see this in any way endangering the project. I commend you [Chairman Bunch] for initiating the potential of having an incredible expansion of our Mall, but why not let the public know that we as The Township are looking at this. It’s a major project.”

For future meetings, Dr. Shelley Sekula-Gibbs requested an update on the ongoing concerns about the level of water in the ponds and for experts (Woodlands Water, MUDs) to report, in regard to long-term management and drainage changes. Sharp confirmed the item is on the agenda and there will be a presentation at the December 7 meeting.

Concerns were also voiced on Creekside Park power outages. Sharp confirmed that The Township has requested and hoping the issue will be presented at a future meeting.

View the video, agenda, and presentation from the Special Board meeting on The Woodlands Township website at https://woodlandstx.new.swagit.com/videos/189735