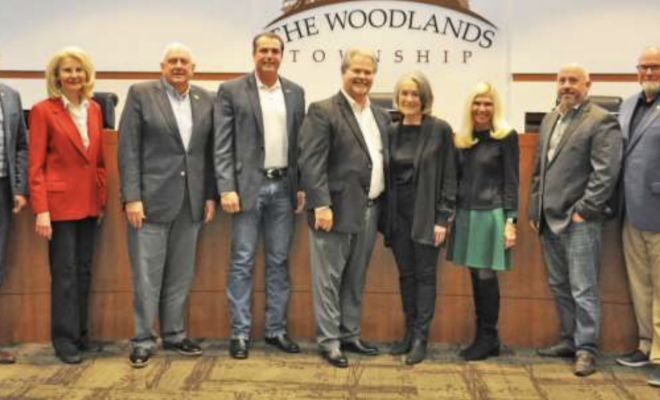 The Woodlands Township Board of Directors issued three proclamations, recognized the retirement of Assistant General Manager John Powers and heard a presentation from Entergy during their Regular Board Meeting on December 8, 2021. The Woodlands Township is also making plans to offer bus service to the 2022 Houston Livestock Show and Rodeo through The Woodlands Express Park and Ride Service on weekends during the rodeo.

Following public comment at the meeting, President/General Manager Jeff Jones recognized John Powers, Assistant General Manager for Community Services, on the occasion of his retirement after 23 years of service in The Woodlands.

Mr. Powers, who has worked for the Township and its predecessor for 23 years, is retiring December 31, 2021.

“Mr. Powers is a true professional and has been involved in so many of the great amenities and services we have today in The Woodlands,” said President & General Manager Jeff Jones. “His tireless efforts, vision and commitment were certainly contributing factors for Niche.com to name The Woodlands the Best City to live in the United States.”

All seven board members took the opportunity to honor Mr. Powers and provide personal anecdotes of their work and experience with him.

Dr. Shelley Sekula-Gibbs said he was a most generous public servant. Director Jason Nelson said he had a true servant’s heart.

Director Bob Milner said he had left footprints that would be long remembered. Dr. Ann Snyder said she was grateful for his integrity and that every village in The Woodlands is stronger because of his dedication.

Director John Anthony Brown appreciated his patience and calm demeanor under stress, and Director Bruce Rieser said Mr. Powers is “the human google” for his wealth of knowledge about The Woodlands.

Chairman Gordy Bunch mentioned the Niche.com award as #1 in the United States, and that Mr. Powers played a large role in that accolade and has been the glue holding the Township together for a long time. The full-house audience responded with standing ovations in honor of Mr. Powers.

Full Board of Director comments can be viewed at this link: https://woodlandstx.new.swagit.com/videos/149220

He also managed the consolidating move and remodeling of the Township building at 2801 Technology Forest in 2011 and was instrumental in the building earning a LEED (Leadership in Energy and Environmental Design) designation in 2013.

In addition, he is a recognized leader and mentor to many, both within and outside the Township. He served as president of the Texas Recreation and Park Society (TRAPS) from 2006 to 2007, and in 2008 was named a Dan Whitworth Fellow, the highest award the Society can bestow. To earn this honor, the recipient must be a member of TRAPS and have given outstanding service to the parks and recreation field for a minimum of ten (10) years, in addition to contributing to the promotion and advancement of the Texas Recreation and Park Society.

Mr. Powers served many years as the First Year Curriculum Chair for the National Recreation Park Association Park Maintenance and Resource Management School and as an Adjunct Professor of Landscape Design for the New Mexico Junior College.

He is also a past state president of the New Mexico Jaycees and a JCI Senator. He served on the Southwest Turfgrass Association Board of Directors, The Friendship Center Board of Directors, is a Leadership Montgomery County Alumni, and a Charter member and past Chairman of the Greater Gulf Coast Parks and Recreation Directors Association. He is a member of The Woodlands Rotary Club and a Paul Harris Fellow.

Prior to The Woodlands, Mr. Powers served the County of Los Alamos, New Mexico, as Parks Superintendent and Acting Director overseeing parks, trails, cemetery, aquatics center, ice rink, golf course, rodeo arena and stables. He was a practicing Registered Landscape Architect whose firm designed, constructed and maintained large scale residential, commercial and governmental projects throughout New Mexico and West Texas. He attended the University of New Mexico, Texas Tech University and has a Bachelor of Business Administration degree from the University of Phoenix.

He and his wife Debbie live in the Village of Cochran’s Crossing. They have been married for 45 years. Mrs. Powers will also be retiring this year, and together they look forward to travelling and enjoying more time with their children and grandchildren.

At the meeting, Mr. Powers said, “It has been my honor and privilege to serve the organization and this community. We all know that we have to work together for God’s great purpose and that is service to each other.  I’m truly thankful but most importantly to my wife Debbie of 45 years who supported me year after year. I could not have done anything without her. She’s retiring too, and we’re both going to move on to the next phase of our life and see what God brings for us next. Thank you very much.”

The Board issued three proclamations, including recognition of The John Cooper School championship football program, the Tomball ISD Creekside schools for their peanut butter food drive and Keep US Fed Montgomery County.

In addition, the Board heard a presentation from Entergy representatives who described improvements that have been made to the electrical system serving The Woodlands in the past year. Entergy recommends their customers to download the Entergy app and sign up for MyEntergy in order to receive the best and most updated communications from Entergy.

On the Consent agenda, the Board:

On the regular agenda, the Board: