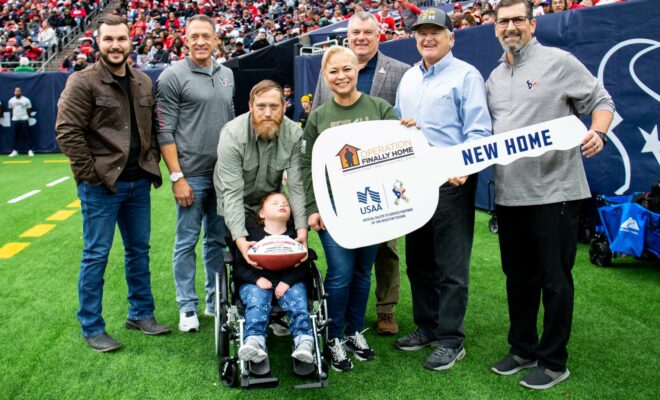 HOUSTON, TX – Operation Finally Home, the Houston Texans, and USAA surprised U.S. Army Sgt. Joanna Ellenbeck and her family with the news they’ll be moving into a custom-built, mortgage-free home built by Century Communities on a lot donated by The Howard Hughes Corporation® in The Woodlands Hills next year. The surprise took place during the Texans game on Sunday, December 18 at NRG Stadium.

Ellenbeck thought she was being honored as the Texans and USAA Salute to Service Moment honoree of the game. However, at the end of the Salute to Service feature, the announcer shared even more exciting news – they were receiving a custom built, mortgage-free home on behalf of Operation Finally Home, Texans, and USAA!

A groundbreaking event will take place in Spring 2023 at the future site of the home located in The Woodlands Hills.

Growing up in a family with a long history of military service, U.S. Army Sgt. Joanna Ellenbeck always knew she was destined to serve her country. Ellenbeck’s great-grandfather, grandfather, and father all served in the armed forces, a lineage that stretches back to World War II.

Ellenbeck enlisted in the U.S. Army on July 2, 2002, shortly after the tragic events of Sept. 11, 2001. She served 8 eight years and six months, including three combat deployments: one to Afghanistan and two to Iraq. Serving with the 25th Infantry Division, Ellenbeck worked as an avionics mechanic throughout her military career, repairing Black Hawks, Chinooks and Kiowa 58 helicopters.

During her three deployments, Ellenbeck began to understand the harsh realities of war. During her first deployment in 2004, Ellenbeck was assigned to complete a two-week guard detail because the unit was low on troops. During this time, a suspicious truck approached the perimeter, and Ellenbeck and a fellow service member investigated. They discovered a wounded man hidden in the bed of the truck, suffering from the effects of a bomb detonation. Ellenbeck began to render first aid, during which the man repeatedly struck her. Later interrogations revealed the man was a terrorist sent to detonate a bomb and kill American troops.

Ellenbeck carries visible and invisible scars from her service. She suffered a debilitating back injury during her 2004 deployment. Additionally, she suffers from Post-Traumatic Stress Disorder (PTSD), depression, tinnitus, a sciatic nerve disorder, sensory deficits in both lower legs and knee pain. Ellenbeck’s doctors believe her service-related injuries will require her to use a wheelchair in the future.

For her service, Ellenbeck has been awarded multiple awards and recognition. These include an Iraq Campaign medal with five stars, four Army Commendation Medals, two Meritorious Unit Commendations and two Army Good Conduct Medals, in addition to a National Defense Service Medal and a Global War on Terrorism Expeditionary Medal, among others. She was honorably discharged in 2010.

Currently living in Arizona, Ellenbeck plans to move to Houston to be closer to family and friends and provide her young daughter with the medical, therapeutic and educational support she needs. Ellenbeck’s daughter, who was born blind and has cerebral palsy, uses a wheelchair. In their free time, Ellenbeck and her daughter enjoy horseback riding.

The Houston Texans Foundation was founded in 2002 with a mission of being Champions for Youth. The Foundation believes that youth are the champions of our future, and therefore it is dedicated to enhancing their quality of life. Since 2002, more than $41 million has been raised through annual fundraising events, disaster response programs, an annual United Way campaign and partnerships with nonprofit organizations on gameday. Through fundraising efforts, the Foundation supports and administers programs in education, character development and health and wellness to empower the next generation of Texans. The Foundation has aligned with three strategic community partners; the Houston Texans YMCA, Boys & Girls Clubs of Greater Houston and the Houston Food Bank, and the majority of their support goes to these three organizations through monetary donations, programming and volunteerism. The Houston Texans Foundation is committed to inspiring positive change within the Houston community.

Founded in 1922 by a group of military officers, USAA is among the leading providers of insurance, banking, and investment and retirement solutions to more than 13 million members of the U.S. military, veterans who have honorably served and their families. Headquartered in San Antonio, USAA has offices in eight U.S. cities and three overseas locations and employs nearly 38,000 people worldwide. Each year, the company contributes to national and local nonprofits in support of military families and communities where employees live and work. For more information about USAA, follow us on Facebook or Twitter (@USAA), or visit USAA.com.

Based in New Braunfels, Texas, Operation Finally Home is a nonpartisan/nonprofit 501(c)(3) organization with a mission to provide custom-built, mortgage-free homes, transitional housing and home modifications to veterans, first responders and their families. Established in 2005, the organization has completed or is in planning on more than 430 home projects in over 30 states since 2005. Operation Finally Home partners with corporate sponsors, builder associations, builders, remodelers, developers, individual contributors, and volunteers to help these heroes and their families by addressing one of their most pressing needs – a place to call home. For more information about Operation Finally Home, visit OperationFinallyHome.org, follow @OpFinallyHome on Twitter and find us on Facebook.

Century Communities, Inc. (NYSE: CCS) is a top 10 national homebuilder, offering new homes under the Century Communities and Century Complete brands. Century is engaged in all aspects of homebuilding — including the acquisition, entitlement and development of land, along with the construction, innovative marketing and sale of quality homes designed to appeal to a wide range of homebuyers. The Colorado-based company operates in 18 states and over 45 markets across the U.S., and also offers title, insurance and lending services in select markets through its Parkway Title, IHL Home Insurance Agency, and Inspire Home Loans subsidiaries. To learn more about Century Communities, please visit CenturyCommunities.com.

The Howard Hughes Corporation owns, manages, and develops commercial, residential, and mixed-use real estate throughout the U.S. Its award-winning assets include the country’s preeminent portfolio of master planned communities, as well as operating properties and development opportunities including: the Seaport in New York City; Downtown Columbia® in Maryland; The Woodlands®, Bridgeland®, and The Woodlands Hills® in the Greater Houston, Texas area; Summerlin® in Las Vegas; Ward Village® in Honolulu, Hawaiʻi; and Teravalis™ in the Greater Phoenix, Arizona area. The Howard Hughes Corporation’s portfolio is strategically positioned to meet and accelerate development based on market demand, resulting in one of the strongest real estate platforms in the country. Dedicated to innovative placemaking, the company is recognized for its ongoing commitment to design excellence and to the cultural life of its communities. The Howard Hughes Corporation is traded on the New York Stock Exchange as HHC. For additional information visit HowardHughes.com.

The Greater Houston Builders Association, chartered in 1941, is a trade organization whose members are involved in the development, homebuilding, and remodeling industries in 11 counties in the Houston area. The association currently has over 1500-member companies, is the 3rd largest builders association in the country and the largest in Texas. GHBA is the voice of Houston’s residential construction industry, serving their members and the community through education and advocating professionalism and quality housing. The association also interacts with the government, community and general public to enhance the business climate for its members and to provide quality obtainable housing to the community it serves. The association is also active in community outreach and charitable events.