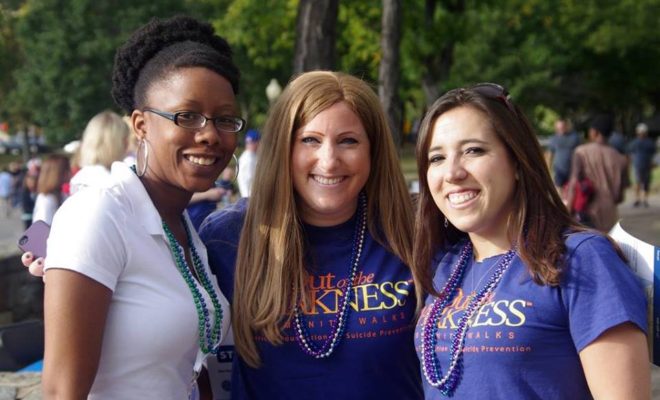 Walkers take to the streets to fight Suicide

THE WOODLANDS, TX – More than 1500 people throughout the Greater Houston area are expected to participate in the Out of the Darkness Community Walk at 9 a.m., November 11th at 1700 Block of Lake Robbins at Six Pines Drive. This fundraising walk supports the American Foundation for Suicide Prevention’s local and national programs and its bold goal to reduce the annual rate of suicide 20 percent by 2025.

“Suicide affects one in five American families. I am walking to bring awareness to this leading cause of death and let people in the community know that they are not alone. There is help out there for those who live with a mental health condition and support for those who have lost a loved one to suicide,” said Kimberlee Moayed,Greater Houston Area Co Chair.

The Greater Houston/Woodlands Walk is part of a national Out of the Darkness walk movement, consisting of Community Walks, Campus Walks and two Overnight walks each year. In 2016, AFSP hosted more than 500 Out of the Darkness Walks spanning all 50 states, uniting more than 240,000 walkers and raising millions for suicide prevention research, education and advocacy.

Proceeds from the walks support programs such as Talk Saves Lives™, an educational presentation on how to recognize the risk factors and warning signs of suicide, and a new film entitled It’s Real: College Students and Mental Health that launched this spring. Through fundraising at the walks and other community and national events, AFSP has been able to fund 552 research grants totaling over $34 million dollars since 1987.

“These walks are about turning hope into action,” said AFSP CEO Robert Gebbia. “Suicide is a serious problem, but it’s a problem we can solve. The research has shown us how to fight suicide, and if we keep up the fight the science is only going to get better, our culture will get smarter about mental health, and we’ll be able to save more people from dying from depression and other mental health conditions.”

The guest speaker this year is Kim Hess, a local Woodlands resident who is the Founder of Cassidy Joined for Hope, an organization committed to teen suicide prevention. For more information go to www.cassidyjoinedforhope.com

Join the community for a day of remembrance, solidarity, and awareness with a coffee trailer, food options, and lots of activities. To register visit the official walk information page: https://afsp.donordrive.com/event/houston

The American Foundation for Suicide Prevention is dedicated to saving lives and bringing hope to those affected by suicide. AFSP creates a culture that’s smart about mental health through education and community programs, develops suicide prevention through research and advocacy, and provides support for those affected by suicide. Led by CEO Robert Gebbia and headquartered in New York, and with a public policy office in Washington, D.C., AFSP has local chapters in all 50 states with programs and events nationwide. AFSP celebrates 30 years of service to the suicide prevention movement.