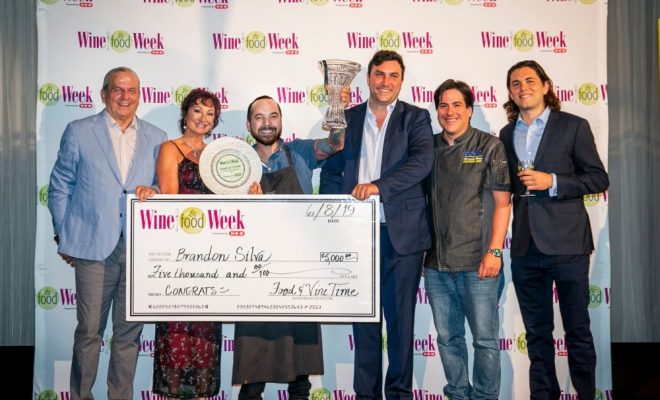 THE WOODLANDS, TX – The 15th anniversary celebration of Wine & Food Week concluded in the Woodlands with a $5,000 check presentation and final closing ceremony capping off an extraordinary week of culinary and wine making achievement. More than 10,000 foodie friends, celebrity chefs and wine makers from across the U.S. raised a glass in honor of this annual food fete. All total, the week featured 50 accomplished chefs, 92 restaurants, 928 wines, numerous educational seminars, and various culinary events ranging from taco takedowns to the HEB Wine Walk to the elegant Ladies of the Vine Luncheon panel and culminating in the elegant Wine Rendezvous Grand Tasting & Chef Showcase.

Wooster’s Garden took top honors for a braised beef short rib with fermented cauliflower and fresh shaved summer black truffles claiming the coveted Chef of Chefs award and a $5,000 cash prize along with the Waterford Crystal Trophy presented by GOYA Foods. In second place was Carlos Ramos, with Latin Bites for a ceviche mussel. And, in third, was Nick’s Fish Dive & Oyster Bar for a miso-marinated sablefish, daikon radish noodles, grilled Shiitake mushrooms with a wasabi ginger beurre blanc sauce.

“This 15th anniversary celebration was a chance for us to reunite with so many talented people who’ve impacted the world of wine and food in big ways while recognizing the fresh faces making their mark as well,” said Wine & Food Week founder Constance McDerby. “We hope that guests at Wine & Food Week 2019 enjoyed all the glorious sips and tastes as much as we enjoyed reuniting with the many people who’ve helped this event grow to the magnitude that it has over a decade and a half.”

Wine & Food Week supports charitable organizations such as New Danville, The Woodlands Waterway Arts Council, Montgomery County Food Bank, and The John Cooper School Signature Series just to name a few. Food & Vine Time Productions has raised well over one and a half million dollars through various channels for local charities over the years.

Wine & Food Week, produced by Food & Vine Time Productions, is the first multi-day, multi-faceted, comprehensive destination culinary and wine event in the Houston Metro area. Owners Clifton and Constance McDerby are dedicated to showcasing the culinary talent in the Houston metro area while welcoming great chefs from across the globe who share their passion for flavors. They also are committed to extending their love of wine by featuring the flavors of the wine makers, growers, and producers who bring a time-honored tradition of the flavors of the vine.