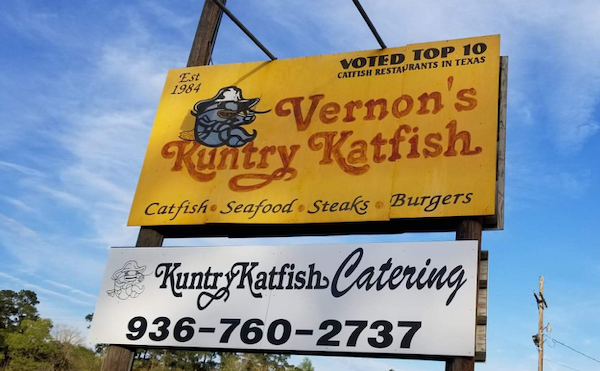 Vernon’s Kuntry Katfish in Conroe, Texas is the home for many Southern favorites along with seafood favorites such as shrimp, scallops, oysters. Customer favorites include chicken fried steak, and of course, their famous fried “katfish.” Everything on their menu is cooked to order and made fresh every day, with a side of Southern hospitality along with big country portions.

Originally owned by Vernon Bowers, but after he passed away in 2001, his wife Mary Bowers still owns the restaurant and her kids Buster and Debbie run the day to day operations. Vernon’s Kuntry Katfish serves home-style cooking just like your Memaw’s house for 33 plus years. The family’s restaurant has become a community staple of the Conroe area, as the family has always gave back to their community churches and schools.

Vernon’s Kuntry Katfish didn’t give up when Hurricane Harvey flooded the restaurant with four feet of water. The community came together and joined the Bowers family for benefits for their employees, they continued to get their pay so they could pay rent, their car notes and so they could live while the restaurant was down., The  restaurant offered fish,fries and hushpuppies from a tent in the parking lot in exchange for donations and a GoFundMe was launched to support all of the restaurants employees during the 3 month re-construction of the restaurant.

Catfish is what made them famous and one can get their farm raised catfish served fried and hand breaded, grilled or blackened. Signature Katfish dishes are their Grilled Lemon Pepper Katfish or Blackened Katfish severed Kajun Style or a full meal of Fried Katfish with Kuntry Fries, Pinto Beans & Coleslaw. If you want a little of everything, try the Seafood Platter with Two Sides – fish, shrimp, oysters, stuffed crab and scallops.

Whether you’re having a casual outing with the family or you’re grabbing lunch with co-workers, Vernon’s Kuntry Katfish is the perfect place to go. Also be sure to ask us about our full-service catering!

What made Vernon open a restaurant specializing in fried catfish?

Buster: “The proximity of Lake Conroe, his philosophy was if you didn’t catch any fish when you were fishing on Lake Conroe, you can stop in and have some at Kuntry Katfish.”

How long has the bowers family been in the Conroe area and what community involvement/ events does Vernon’s Kuntry Katfish participate in?

Debbie: Been in Conroe since Dec 1981. Montgomery County Fair Association (MCFA), Conroe High School Booster Sponsor and sponsor to a variety of other schools and church organizations. We also try our best to donate to benefits and fundraisers that we’re approached by.

How much did Vernon’s Kuntry Katfish change after Mr. Vernon Bowers passed away in 2001?

Buster: “Mr. Vernon bowers passed away in 2001. We’ve kept the restaurant the exact same, from management to recipes, until Hurricane Harvey happened. We then went through the whole remodel process which truly became a humbling experience.”

What positive came out after Vernon’s Kuntry Katfish came after the restaurant flooded during Hurricane Harvey?

Debbie: Having to shut down after Hurricane Harvey gave us the opportunity to update and repair the restaurant due to the overwhelming response by the community. The way the community rallied around us was amazing and humbling to see. They pulled us out of the water literally and figuratively speaking. Because of the amazing community support, we were able to come back stronger than ever.

Besides the famous catfish, what else does Vernon’s Kuntry Katfish do well?

Buster: Country Fried Ribeye is a customer favorite along with the Blackened Seafood options on our menu.”

You all have some really good desserts and pies, are they family recipes?

Debbie: Good Pie – This was made at a family picnic by one of our Aunts and Dad (Vernon) kept raving how it was “GOOD PIE!”. He of course had to add it to the menu after that. Our Banana Pudding and Bread Pudding are also family recipes.

What do you attribute to the restaurants long term success?

Debbie: Community involvement, Loyalty to our employees and customers

What would be your perfect meal be start to finish at Vernon’s Kuntry Katfish?